The megastar employs his charm to welcome some really interesting contestants 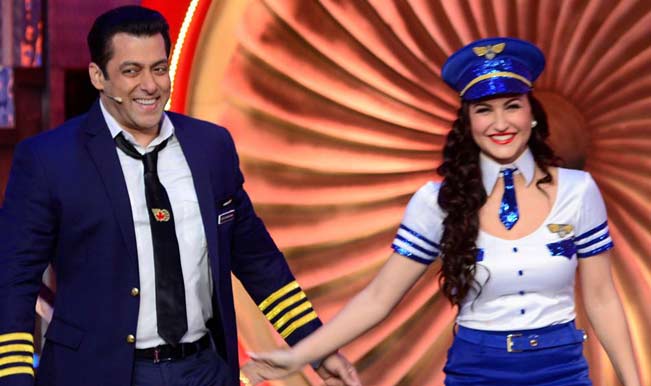 Finally, the wait is over! Bhai aka Salman Khan proved yet again why Bigg Boss continues to fetch eyeballs across the country-and even beyond- in the most entertaining wa. And hey, isn’t Salman the most entertaining host ever as well? This time around, the 48-year-old superstar made a grand entry as the captain/pilot,all set to take off, as the usual glass-walled house got  transformed into an  airliner. With colorfully controversial passengers putting on their seat-belts to take a long and really entertaining flight we glued to our  television sets to review the grand premiere of the show that unfolded on Colors channel. Here’s our take on the the gala and the three special reasons why we think that this season is going to rock more than ever before. Also Read - Bigg Boss 14 Somvaar Ka Vaar October 19 Major Highlights: Sidharth Shukla Gets Into Heated Argument With Hina Khan, Gauahar Khan

Action in the cockpit

Bhai surely knows how to wield his star power to keep the contestants in splits as well as to make them behave ( at their best behaviour that is!) but this year Sallu’s charm will be coupled with a hatke setting of the house. Yes. instead of the notoriously popular glass-walled place we now a have plane with comfortable recliners with seat- belts et al ( not to forget the cameras that will capture every move made in the airliner). The set-up looks pretty impressive. Only time will tell how this flight will take off though.

Sallu worked his charm yet again in the manner only he can. Looking dapper as ever in his uniform Salman shook hi booty, chatted up with the contestants and used his one-liners to great effects.

The line up of celebrities looks pretty impressive in the sense that it has a mixed bag of people who are known for their varied temperaments, antics and interesting personality traits. We also like liked the fact that contestants were rolled out really quickly without much ado. Bhai welcomed each and everyone with his signature warmth. Here’s the full list of Bigg Boss 8 confirmed contestants

The makers of the show, Bigg Boss 8, have thrown in a surprise here, a solid twist in the tale that has surely raised many curious eyebrows. The grand premiere of the show hosted by Salman Khan reveals the introduction of a secret society. Now, what’s that! you must be wondering. And here’s what you need to know about this highly unexpected surprise.

We see three individuals-whose identities are not revealed, yet- in their cloaks. They are superbly built with tremendous strength, or so are told. They will watch over the contestants. In a way this trio will be middlemen of sorts who will keep an eye on the contestants and their behavior throughout the season.

What this also means is that now the contestants will have to win the favors of not just the audiences or Salman Khan or the Bigg Boss, for that matter, but they have to earn the much needed brownie points by keeping the members of the secret society happy. Now isn’t that a mysterious and thrilling addition to the format?

Salman Khan summed up the idea of the secret society well. He opined that history has repeatedly shown that whenever middlemen have tried to intervene any deal, their help has only led to more confusion, chaos and scams.