Celebrities usually are quite active on their social media account and they let us take a sneak peek into their life but sometimes it backfires and netizens troll them. A lot of Netizens also thinks that trolling is the new cool and sometimes they are bang on but sometimes the trolls go too far and upset the viewers. One such incident happened when netizens trolled Aishwarya Rai Bachchan for her post on Mothers Day. Also Read - Inzamam-ul-Haq Reveals How Sunil Gavaskar Helped Him Tackle Short-Pitched Deliveries

Aishwarya Rai Bachchan shared an adorable picture on her Instagram which the doting mother was seen kissing her daughter Aaradhya Bachchan on her lips. The actress captioned the picture as, “LOVE YOU UNCONDITIONALLY💖😘😇✨Happiest Mama in the World 😍.” Also Read - World's First Covid-19 Vaccine? A Ray of Hope as Russia’s Sechenov University Successfully Completes Clinical Trials

Well, it is an adorable picture of mother-daughter relationship where Aishwarya is showing her love and affection towards her daughter Aaradhya.  The fans and well-wishers found the picture too awestruck and loved the mother-daughter bond. But trollers found the gesture to be too modern and objectified it as ‘sexual abuse’ and some found the gesture to be too ‘yuck’ to do. Also Read - West Bengal Latest News: Debendra Nath Ray, BJP MLA Found Hanging in His Home, Family Calls it 'Murder'

LOVE YOU UNCONDITIONALLY💖😘😇✨Happiest Mama in the World 😍

A post shared by AishwaryaRaiBachchan (@aishwaryaraibachchan_arb) on May 13, 2018 at 9:57am PDT

Have a look at the outraged comments 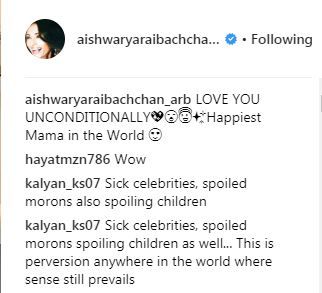 The trolls also questioned Aishwarya’s sexual orientation and referred to her as ‘lesbian’.