'83: After posting a picture with Kapil Dev, Ranveer Singh now shares a happy photo with cricketer Mohinder Amarnath from the Dharamshala stadium.

Actor Ranveer Singh is currently practising cricket in Dharamshala for his upcoming film ’83. After learning the famous ‘natraj shot’ by former Indian skipper Kapil Dev, he has now gone to train with another legendary cricketer – Mohinder Amarnath. The actor has taken to social media to make two posts about the celebrated cricketer. In the first post, he asked his fans to guess who he was posing with. Ranveer captioned the post as, “Guess who” (sic) Also Read - Deepika Padukone Tests Covid-19 Positive After Her Family Contracts The Virus

Also Read - Mini Mathur Gives Back To Troll Who Asks If Kabir Khan is Bankrupt After Ranveer Singh's 83
View this post on Instagram
Also Read - Too Much Workload Detrimental to Producing Genuine All-Rounder: VVS Laxman

And in the second post, he gave the answer himself by revealing a lovely picture of himself hugging Amarnath. The other photos in the post have the cricketer teaching actor Saqib Saleem some cricketing skills. He posted in the caption, “JIMMY!!! 🏏👑 It’s the one & only, Champion of Champions #MohinderAmarnath!!! @saqibsaleem @83thefilm @kabirkhankk #journeybegins” (sic)

Ranveer’s ’83, directed by Kabir Khan, is based on the story of India’s first cricket World Cup win in 1983 under the captaincy of Kapil Dev. Mohinder Amarnath was declared as Man of The Match in both the final and the semi-final matches that led India to the victory. He is considered as one of the finest batsmen across the world and is often revered for withstanding pain like no other player.

Earlier, Ranveer posted another still from his practice session in which he was seen posing with the one he is playing in the film – Kapil Dev. The actor took to Instagram and called the cricketer a ‘LEGEND’ while posting a striking picture.

In another post, he shared a clip of the cricketer performing the natraj shot as Ranveer was standing behind him closely observing Dev’s leg movement.

His wife and actor Deepika Padukone commented on the post and asked Ranveer to have the most of these moments as none of this will ever come back to his life. 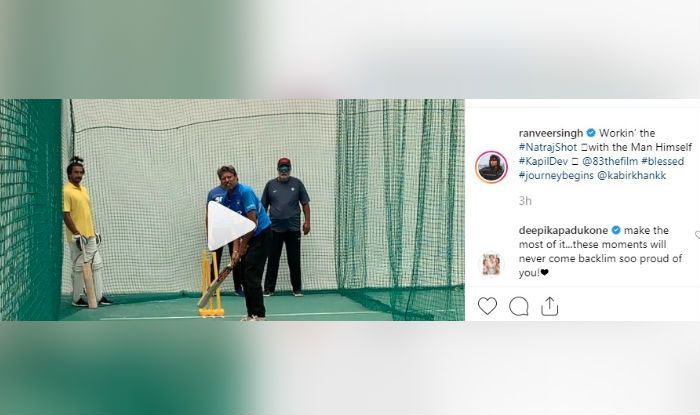 ’83 stars a lineup of actors and cricketers. It features Saqib Saleem, Ammy Virk, Hardy Sandhu, Pankaj Tripathi, Chirag Patil and Tahir Raj Bhasin among others in important roles. The film is slated to hit the screens on April 10, 2020.