Abhishek Bachchan Playing Football in Rain is All Soccer Lovers Ever, Viral Picture Will Tickle Your ‘Twinkle Toes’

For those who love the game or know those who love the game know the real thrill of playing football with your gang in the rain and Bollywood star Abhishek Bachchan recently played his heart out as the sky above opened up. Unless you’re living under the rock, you would know that Abhishek is part of All Stars Football Club, a team that has the biggest names from Bollywood.Also Read - Shehnaaz Gill Tweets on World Beard Day, Abhishek Bachchan Has a Goofy Response - Here's What he Said

Taking to his Instagram handle, Abhishek shared a picture from the recent match which took place in torrential downpour and playing unperturbed was our Manmarziyaan star. Donning a navy blue jersey, Abhishek was seen concentrating on kicking the football to and fro and captioned the hot picture, “Twinkle toes! @allstarsfc_pfh (sic).” While Abhishek’s stint in the rain won former Swedish footballer, Bojan Djordjic’s heart, who commented, “New midfielder for @chennaiyinfc boss? (sic)”, the picture won a sweet comment from sister Shweta Bachchan which was unlike any other sibling who prefer to take digs at each other on social media. “Sporty Spice” read Shweta’s comment and we’re sure Abhishek would be blushing. Also Read - Did AB Jr Pick That Hoodie From Aaradhya's Wardrobe? Twitter User Asks 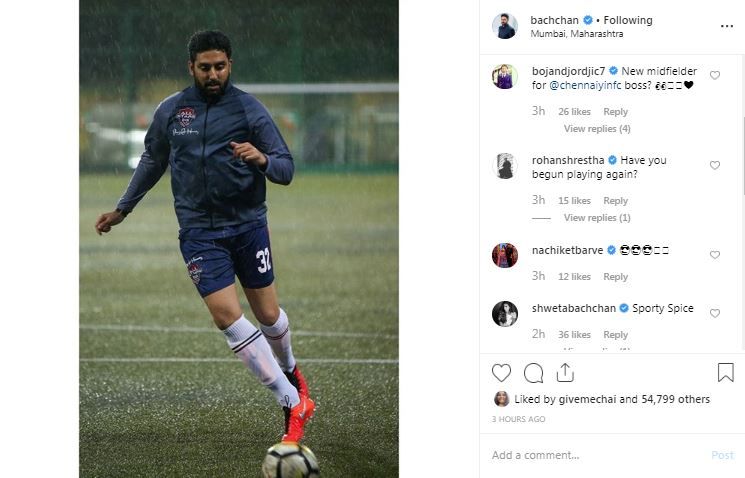 Apart from footbaal, Abhishek own a kabaddi team and recently, Aishwarya Rai Bachchan, who has been away from Instagram for almost two months now, shared a picture with her daughter Aaradhya Bachchan from the Kabaddi League. The mother-daughter duo sent their good wishes to Abhishek Bachchan’s kabaddi team Jaipur Pink Panthers. Aishwarya took to her Instagram to share the still where she and her daughter posed in their Pink Panther jerseys. Abhishek commented on the photo and called the two his ‘Good luck charms’.

On the professional front, Abhishek, is gearing up for Anurag Basu’s next, an untitled film which is an action-comedy anthology and is all set to release on January 24, 2020. The film is said to be a multi-starrer film starring, Abhishek Bachchan, Rajkumar Rao, Aditya Roy Kapur, Pankaj Tripathi, Fatima Sana Shaikh and Sanya Malhotra and will reportedly be a sequel of Anurag’s 2007 film Life in a… Metro.