Neetu Kapoor brims with love as she and Rishi Kapoor get flanked by the Bachchan and Kapoor kids in New York, Soni Razdan-Dia Mirza smear the frame with heart emojis as Aishwarya-Abhishek and Alia-Ranbir cosy up for the lens

There is no better remedy than family love and when you have friends like family, the healing power only doubles up. Same was the case for yesteryear actors Neetu Kapoor and Rishi Kapoor as son Ranbir Kapoor and his girlfriend Alia Bhatt along with Aishwarya Rai Bachchan, Abhishek Bachchan and Aaradhya Bachchan flew down to New York to paint “beautiful moments” on Sunday night. Also Read - Jodhaa Akbar Set Caught Massive Fire in Karjat, No Casualties

Sharing her happy time with the fans, Neetu took to her Instagram handle to acknowledge the humungous family love. Seen cuddling up for poses along with other members of the Kapoors, Rai and Bachchan clan, Rishi, who has been recovering from cancer, looked hail and hearty with all the extra ounces of unconditional love. Neetu captioned the pictures as, “Your family is your whole world so so many LOVES in these beautiful moments” (sic). Participating in all that PDA, Alia’s actor-mother Soni Razdan commented, “All looking so well and happy” and punctuated it with heart emojis while actress Dia Mirza too smeared the comment section with same red heart emojis. Also Read - List of Bollywood Celebs Who Are Helping People in Fight Against COVID-19

Also Read - Nikita Dutta Shares Experience of Working With Abhishek Bachchan in The Big Bull: I Was Nervous, But He Made Me Comfortable 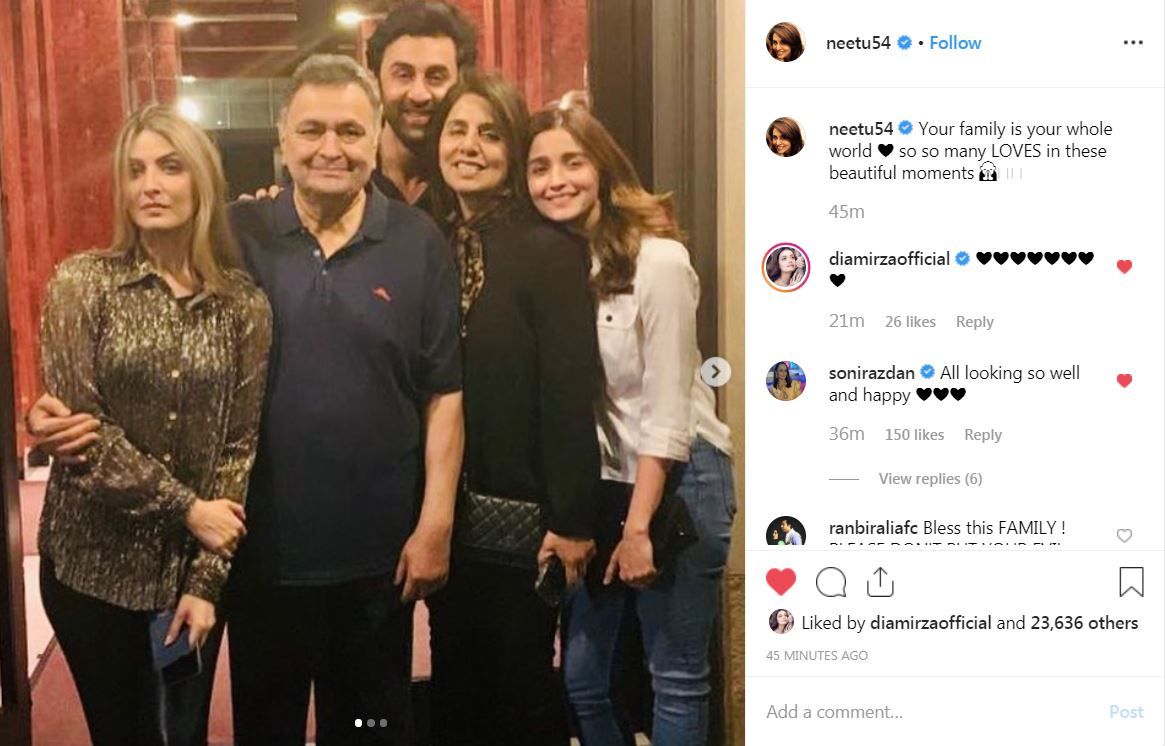 Rishi Kapoor recently declared himself to be cancer free. A report in DNA suggested that Rishi and Neetu Kapoor will be back in September this year after the actor is fully recovered. The report mentioned, “A source tells us that the veteran artiste is on his way to recovery and will be returning to India this September”.

Rishi had earlier told Deccan Chronicle that his wife, Neetu Kapoor, has been like a rock ever since he was diagnosed with the illness. “Neetu has stood by me like a rock. Otherwise, I am too difficult a person to handle as far as food and drink are concerned.” Talking about his kids Ranbir Kapoor and Riddhima, he said, “My kids Ranbir and Ridhima have really shouldered my problems.”

In September 2018, when Rishi left the country he took to Twitter to announce the news and wrote, “Hello all! I am taking a short leave of absence from work to go to America for some medical treatment. I urge my well-wishers not to worry or unnecessarily speculate. It’s been 45 years “plus” of wear and tear at the movies. With your love and good wishes,I will be back soon!.”