When was the last time you saw Alia Bhatt and Ranbir Kapoor together and they didn't look good? Well, the couple made for such a beautiful picture while posing at the Ambanis' Ganesh Chaturthi celebrations last evening. Check out the latest pictures.

The Ambanis hosted a grand Ganesh Chaturthi bash last evening and in attendance were the who’s who of the film industry. Celebs like Aamir Khan, the Bachchans, Kajol, Karan Johar, Vidya Balan, Karisma Kapoor, Katrina Kaif and Rekha sought blessings of Bappa at Antila. However, the couple who stood out was Ranbir Kapoor and Alia Bhatt. The much-in-love duo dressed absolutely perfect for the occasion and looked like a made-for-each-other couple. Ranbir and Alia posed together for the shutterbugs at the venue and cut a striking picture. Their good friend Ayan Mukerji joined the two. Also Read - Arpita Khan's Ganpati Celebration: Salman Khan Seeks Blessings, Katrina Kaif Joins in

At the do, Alia carried a pretty colourful saree with all grace. She wore a giant pair of chaandbalis with her flower-printed saree and kept her hair middle-parted. Ranbir, doled up in a grey coloured kurta pajama with an embroidered jacket. Together, they gave one of the best appearances from the evening. Check out some pictures here: Also Read - Ranveer Singh Drops Kaam Bhaari's 'Ganpati Aala re' on Ganesh Chaturthi, Marathi Song Becomes Instant Rage 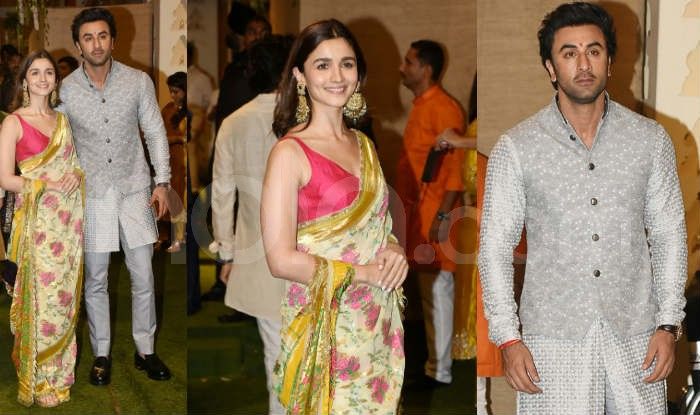 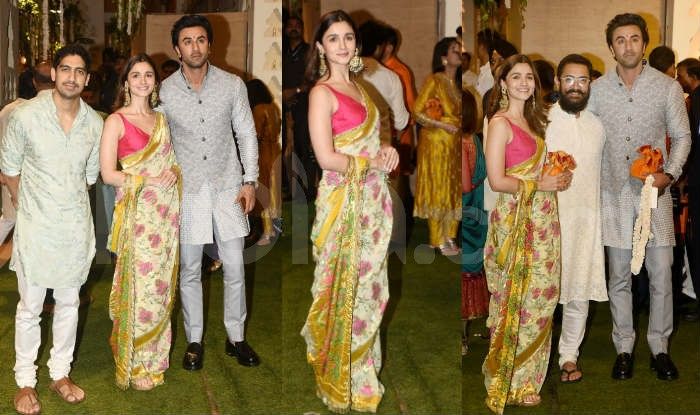 Ranbir and Alia have been making into the buzz for a long time now. They are rumoured to be dating each other and reports suggest that they fell for each other on the sets of Ayan Mukerji’s Brahmastra. The shooting of the trilogy is yet to be completed and the couple is expected to be leaving for Varanasi this month itself. Also Read - Ganesh Chaturthi 2019: Shikhar Dhawan to Virender Sehwag, How Cricketers Wished Fans on Lord Ganesha's Festival | SEE POSTS

The first time Ranbir and Alia triggered the dating rumours was when they appeared together at the wedding reception of Sonam Kapoor last year. The duo posed together at the red carpet and sparked rumours of nurturing something more than just friendship.

Meanwhile, on the work front, both the stars are busy with their respective lineup of films. While Alia was expected to begin Sanjay Leela Bhansali’s Inshallah this month, the film has been indefinitely pushed now. She has got RRR with SS Rajamouli in her pipeline, along with Karan Johar’s Takht. Ranbir is gearing up for YRF’s Shamshera. He also has an untitled film with Luv Ranjan in the kitty.