Alia Bhatt Claiming to ‘Pass Out With Joy’ on F.R.I.E.N.D.S Reunion is Basically All Fans Ever!

Alia Bhatt can't contain her excitement on the news of a F.R.I.E.N.D.S reunion finally taking place and we don't blame her!

Ever since F.R.I.E.N.D.S cast including actors Jennifer Anniston, Courtney Cox, Lisa Kudrow, Matt LeBlanc, Matthew Perry and David Schwimmer announced a comeback, fans have been shedding happy tears and Brahmastra star Alia Bhatt is no different. Expressing her joy on her social media handle, Alia set all fans relating. Also Read - List of Bollywood Celebs Who Are Helping People in Fight Against COVID-19

Sharing a picture from their yesteryears in the sitcom, all of the six F.R.I.E.N.D.S cast captioned it, “It’s happening… ⁣(sic)” leaving fans speechless. Reposting Jennifer’s Instagram post, Alia gushed, “I THINK I MAY JUST PASS OUT WITH JOY! (sic)” Also Read - Netizens Troll Bollywood Celebs as Maldives Suspends Tourists From India 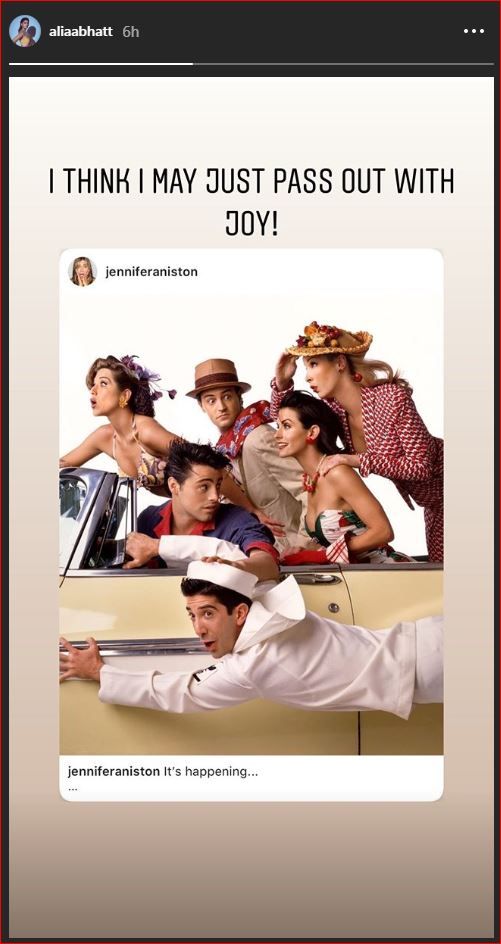 Those who know, know what a fantasy it was to get the epic Rachel Green haircut and the lavish life of the character played by Hollywood diva Jennifer Aniston ever since NBC’s famous TV sitcom, F.R.I.E.N.D.S, impacted popular culture by showing life at its most mundane. F.R.I.E.N.D.S is probably one of the most popular TV Sitcoms ever created and even after ending almost a decade ago the reruns are still going strong on numerous TV channels.

It is probably the most-watched and loved TV show that has become a staple diet and popular culture for the young generation. Rachel, Ross, Monica, Joey, Chandler and Phoebe are like our very own best friends and everyone wants their gang to be like these beloved six fictional characters who have managed to spin magic in the hearts of its viewers.

According to reports, the cast will return to the Original Friends soundstage, Stage 24, for a special episode on HBO Max. Since the announcement, there are speculations as to whether Emma — Ross and Rachel’s daughter — will be watching this. Emma is supposed to be 18 years old this year and the fans can’t forget how this very year 2020 was mentioned in Season 10, Episode 4.