Kangana Ranaut said that Alia Bhatt's performance in Gully Boy was mediocre and one should not promote it otherwise the bar will never be raised.

Actor Alia Bhatt, who’s promoting her upcoming film Kalank these days, has reacted on the statement that Kangana Ranaut recently made about her performance in Gully Boy. Kangana called Alia’s performance in the Zoya Akhtar-directorial ‘mediocre’. Now, commenting on the same, Alia said that she respects Kangana’s opinion and if she isn’t impressed with her performance then she surely needs to work hard and make sure the Manikarnika star likes her performance next time. Also Read - Sushant Singh Rajput Suicide Case: Kangana Ranaut Denies Being Called for Questioning

Alia talked to Bollywood Hungama in a promotional interview and said that all she remembers is how Kangana praised her for her performance in Raazi and therefore, she would like to keep only the good memories with her. The actor was quoted by the portal saying, “I would rather remember how much she had praised me after watching Raazi. And I’d just like to focus on my work.” She added that she would continue to respect Kangana’s work and will start working even harder. Also Read - Styling Tips to Slay in an All-White Outfit Just Like Kangana Ranaut 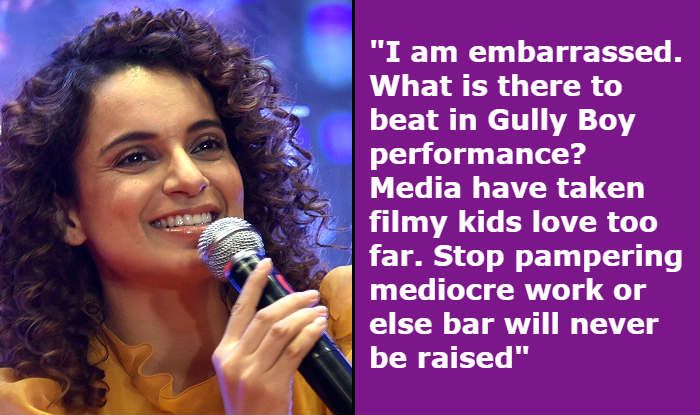 Alia has taken Kangana’s statement in a positive spirit and chosen to not stretch the controversy far. The actor did the same when Kangana accused her of behaving hypocrite. She had said that actors like Alia Bhatt invite her to the special screenings of their films ‘shamelessly’ but don’t support her during the release of her films. The Kalank star later reacted to the same and said that she hasn’t done anything to upset Kangana and if she has, she’ll make sure she calls her personally and apologise. Beauty with brains!