The mid-week blues couldn’t have been driven away more beautifully or did they sink in at all, we wonder as we are greeted with Brahmastra actor Alia Bhatt‘s recent picture from New York. Adding all the necessary shades of pink to our dreary mid-week blues, Alia set fans gushing as she binged on a bowl of chopped strawberries. Also Read - Ranbir Kapoor-Alia Bhatt Pose in Front of Goddess Kali on Brahmastra-Sets, Ayan Mukerji Joins in

In the picture that she shared on her Instagram handle a couple of hours ago, the diva can be seen donning a fuschia pink top with a plunging neckline and highlighted with a hot shade of pink on the lips as the only evidence of makeup. Smiling as she chewed on the strawberries and perhaps hiding an inside joke, Alia looked radiant as she posed from a balcony in New York, with the backdrop of the pink and green plants blurred along with the buildings. The picture was captioned, “Berry funny” (sic) and as if on cue, her Brahmastra co-star, Mouni Roy, commented, “Berry monster” (sic) while her 2 States co-star Arjun Kapoor wrote, “Liability” (sic). While we are not very sure what the latter means, the picture has surely won over fans as it garnered a whopping 1.7 million likes and is still going strong. Also Read - Kareena Kapoor Khan Pouts in First Selfie After Birth of Second Child, Arjun Kapoor Says 'Roast Chicken Glow' 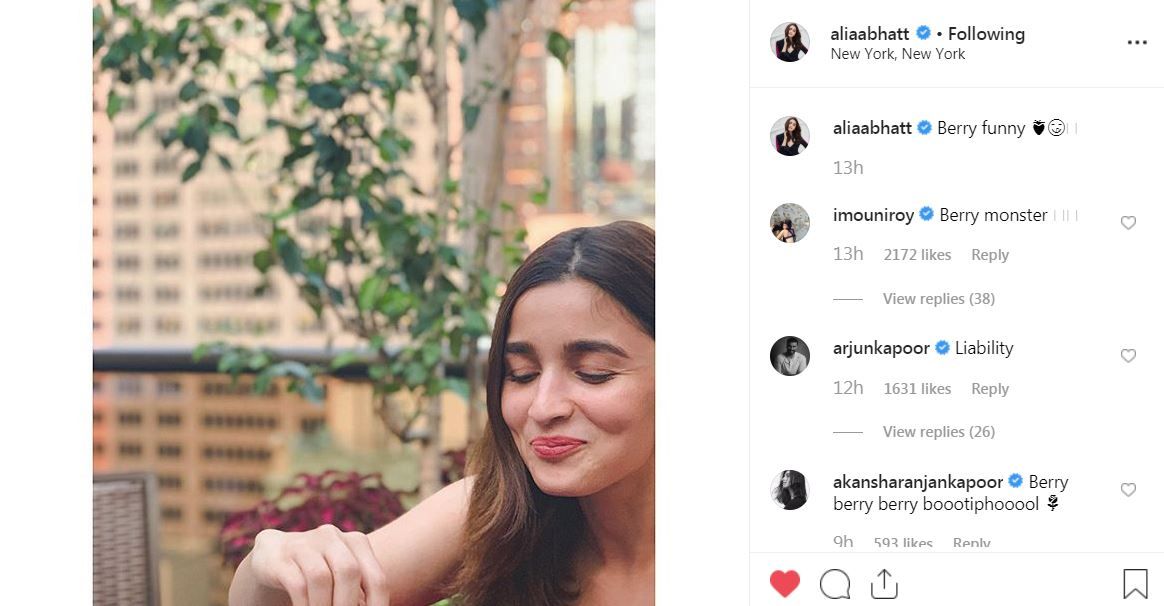 Alia Bhatt and beau Ranbir Kapoor are currently in New York, spending some quality time with Ranbir’s parents Rishi Kapoor and Neetu Kapoor. The couple was spotted strolling around the city, away from the paparazzi but their fans seem to be everywhere. Recently, they were seen clicking selfies together which took the internet by storm. In the viral photos, Alia was seen donning a ripped denim jacket while Ranbir sported a casual t-shirt.

On the professional front, the couple will soon be seen in Ayan Mukerji’s Brahmastrawhich also stars Amitabh Bachchan and Mouni Roy. Earlier set to release in December 2019, the makers have now pushed the release date to summer 2020. The movie is bankrolled by Karan Johar’s Dharma Productions.