Actor Anil Kapoor hosted a grand party for his family and friends last night as he celebrated his 62nd birthday. Sonam Kapoor, Anand Ahuja, Arjun Kapoor, Janhvi Kapoor, and others graced the bash. All the stars looked stylish including Anil and it is hard to believe that he has turned 62. Well, age is just a number for him!Also Read - Malaika Arora Gets Trolled For Her 'Weird Walk', Netizens Say 'Aise Kaun Chalta Hai Bhai'

The inside pictures and videos from the party are doing the rounds on social media, indicating that the stars had a lot fun. In one of the pictures, Anand and Sonam can be seen lost in each other’s eyes. It goes without saying that they are head over heels in love! Also Read - Janhvi Kapoor Drives Fans Crazy With Her Slo-Mo Hair Flip In Bingy Silver Bikini | Watch

The actress can also be seen hugging her brother Arjun in a picture. Janhvi Kapoor too looked stunning in a sparkly green dress. Khushi opted for an all black ensemble. Malaika Arora and Karisma Kapoor also graced the party. Also Read - Janhvi Kapoor's Early Morning Workout Session Will Inspire You to Hit The Gym 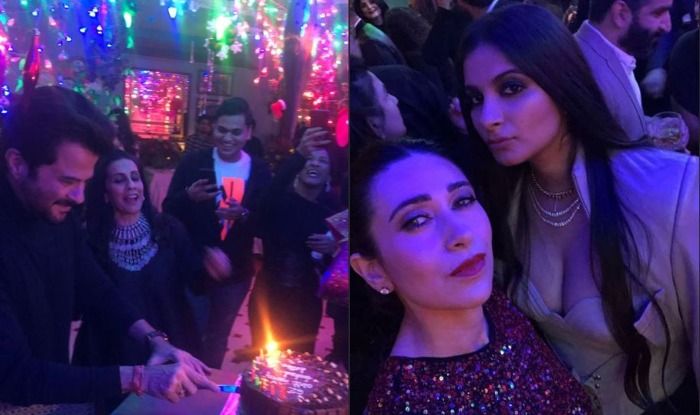 Malaika is rumoured to be dating Arjun for quite some time. Both of them are often spotted together. In fact, during one of the episodes of the celebrity talk show, Koffee With Karan, the actor himself revealed that he is not single. This added fuel to the fire. Speculations have been rife that they are planning to get married. However, nothing official has been said on the same. On the professional front, Anil was last seen in Fanney Khan with Aishwarya Rai Bachchan and Rajkummar Rao. The film couldn’t do wonders at the box office. He is gearing up for the release of his upcoming film, Ek Ladki Ko Dekha Toh Aisa Laga with Sonam. The trailer will be out on December 27. The film is all set to hit the screens on February 1. He will also be seen in Total Dhamaal with Ajay Devgn and Madhuri Dixit.