The trailer of actor Anupam Kher‘s upcoming film, The Accidental Prime Minister, has gone missing from YouTube. The actor has taken to social media to express his concern by posting several screenshots, asking YouTube about the reason. The trailer was released a few days back after which it turned out to be the No. 1 YouTube trend in India. Kher has also expressed that in most parts of the country, the video is either invisible or at the 50th position.Also Read - The Most Dangerous War, It’s a War of Narratives: ‘The Kashmir Files’ Motion Poster Out Now

Seeking help from YouTube on Twitter, the actor wrote, “Dear @YouTube!!! I am getting messages & calls that in parts of our country if you type, trailer of #TheAccidentalPrimeMinister, it is either not appearing or at 50th position. We were trending at No.1 yday. Please help. #HappyNewYear. #37millionviews 😊https://youtu.be/q6a7YHDK-ik (sic) Also Read - Parineeti Chopra Clears The Air: Actor Slams Talent Show For Listing Her as Judge, Calls It Absolute Shame

Dear @YouTube!!! I am getting messages & calls that in parts of our country if you type, trailer of #TheAccidentalPrimeMinister, it is either not appearing or at 50th position. We were trending at No.1 yday. Please help. #HappyNewYear. #37millionviews 😊https://t.co/TUu4AtaRzk pic.twitter.com/KhoZJuxmmu

This is what you get on YouTube after typing ‘The Accidental Prime Minister Trailer’: No trailer video on the first page: 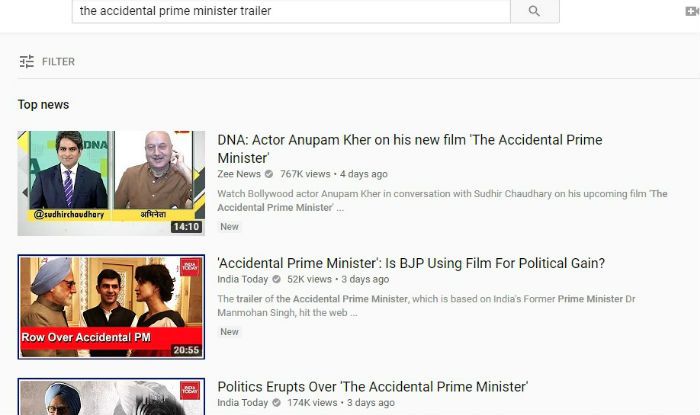 The trailer of The Accidental Prime Minister generated a controversy with the members of political parties questioning the timing of its release. Many also demanded a special screening of the film before its theatrical release in the country. However, Kher refused to fulfil any demand, unless it’s something requested by Dr. Manmohan Singh himself, on whose life the film is based.

The Accidental Prime Minister is a celluloid adaptation of Sanjaya Baru’s book by the same name. Questioning the people criticising the trailer, Kher asked why no voice raised in dissent when the book was launched. He also said that he’s proud of the film and has performed a role of a lifetime in it. He told ANI, “More they protest, more publicity they will give to the film. The book has been out since 2014, no protests were held since then, so the film is based on that”.

The film also stars German actor Suzanne Bernert in the role of UPA Chief, Sonia Gandhi, Lipstick Under My Burkha actress Aahana Kumra as Priyanka Gandhi and Arjun Mathur as Congress President Rahul Gandhi. The film is directed by debutant Vijay Ratnakar Gutte and set to hit the screens on January 11, at the height of campaigning for the national election, due by May this year.