Karan Johar produced Gunjan Saxena: The Kargil Girl starring Janhvi Kapoor in the titular role will now have an OTT release on an online streaming giant, Netflix. The news was announced by Karan Johar on social media. Now, Bollywood celebrities such as Arjun Kapoor, Anushka Sharma, Kartik Aaryan, Siddharth Malhotra among others have come out in support of the film’s release and expressed their excitement for the film. Also Read - Janhvi Kapoor's Gunjan Saxena to Release on Netflix, Actor Shares Heart-warming Video of Original Kargil Girl

Anushka shared the video on Instagram and wrote, “What an absolutely heart-warming & inspiring story to look forward to. More power to you and all the girls out there too! Gunjan Saxena – #TheKargilGirl, coming soon on your Netflix screens!” Also Read - Janhvi Kapoor's The Kargil Girl, Biopic on Gunjan Saxena, to Release on Netflix?

Check out the celeb reactions here:

What an absolutely heart-warming & inspiring story to look forward to. More power to you and all the girls out there too! Gunjan Saxena – #TheKargilGirl, coming soon on your Netflix screens! #GunjanSaxenaOnNetflix @karanjohar @dharmamovies @apoorva1972 @janhvikapoor @sharansharma @netflix_in 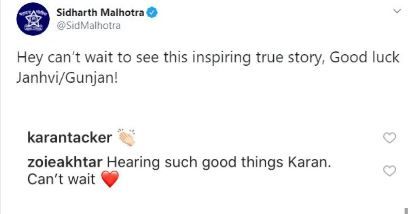 Janhvi Kapoor too captioned the post, “This isn’t just a film for me- it’s a journey that’s taught me to believe in myself. A journey I can’t wait to share with you all. About a girl who set out to do something simple, follow her dreams.” (sic)

The film is based on the biopic of Indian Air Force fighter pilot, Gunjan Saxena, who became the first combat warrior to enter the war zone of Kargil in 1999. Directed by Sharan Sharma and bankrolled by Karan Johar’s Dharma Production, the film features ensemble cast of Vineet Kumar Singh, Angad Bedi, Pankaj Tripathi and Manav Vij