Anushka Sharma wears a Sabyasachi printed saree while making an appearance at a recent award ceremony. She looks gorgeous - special mention to that pair of statement earrings.

Actor Anushka Sharma once again opted for a Sabyasachi wonder to wear for her latest appearance at an event. The actor attended an awards show in Mumbai and turned up wearing a green coloured printed saree by designer Sabyasachi Mukherjee. Looking as radiant as ever, Anushka completely stole the show in her traditional look. Her saree was accompanied by an absolutely gorgeous pair of statement earrings. A small bindi on the forehead and hair tied in a loose bun further accentuated her look. Anushka appeared lovely. Also Read - Anushka Sharma Raises Maternity Fashion Quotient in Yet Another Stylish Dress Worth Rs 17k

She also posed for a few pictures in her saree look before heading for the event. Anushka took to Instagram to share her pictures in which she is seen posing like a timeless beauty. She didn’t put any caption on her picture and let her gorgeous-self do the entire talking. Here’s what she posted: Also Read - Sabyasachi Gifts a Gorgeous Piece of Jewellery to Anushka Sharma Weeks After She Announced Her Pregnancy With Husband Virat Kohli

Anushka was joined by many stars from Bollywood at the event. Kajol, Vicky Kaushal, Sukhwinder Singh and Mumbai Chief Minister Devendra Fadnavis were also clicked at the award ceremony. Check out these pictures: 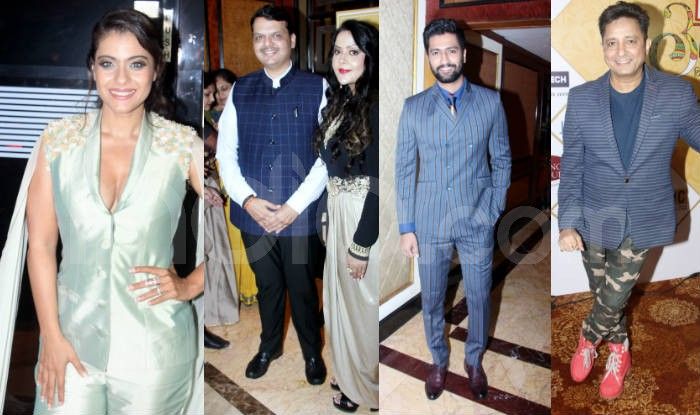 It is known that Anushka prefers wearing Sabyasachi at most of her events. In fact, the actor picked the designer to create all the looks when it came to style her for her wedding. Anushka was dressed from head-to-toe in Sabyasachi during her wedding in Italy. She is seen flaunting various creations by the designer while promoting her movies and attending formal events with hubby Virat Kohli. Her sheer saree look from Ranveer Singh-Deepika Padukone’s wedding reception also created a stir online. Anushka looked fabulous in all her ethnic looks. Agree?