Mumbai: If you still don’t know what is Bachpan Ka Pyaar viral trend, you are certainly living under the rock. This quirky song is the latest internet sensation and is on everyone’s lips. Seems like even the Bollywood actor Anushka Sharma cannot get this trend out of her song.Also Read - Anushka Sharma's Heartwarming Post For Virat Kohli Will Make You Go AWW: 'Missing Hubby Too Much'

Anushka Sharma took to social media revealing that Sahdev Dirdo, the young boy behind the viral Bachpan Ka Pyar song, is giving her sleepless nights. She shared a meme on her Instagram stories in which a person is can be seen lying awake at night because he cannot get the song out of his head. Sharing the meme, Anushka dropped laughing emojis. Also Read - Anushka Sharma is Proud Wife After Virat Kohli's 71st Century, Check Her Love-Filled Post For Husband 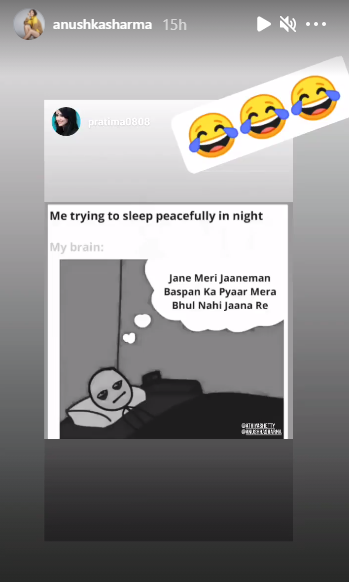 Meanwhile, talking about Anushka Sharma, she recently shared pictures with hubby Virat Kohli as they roam around the streets of London. Apart from this, Virat-Anushka also celebrated their daughter Vamika’s six-month birthday. Sharing the adorable pictures, Anushka wrote, “Her one smile can change our whole world around! I hope we can both live up to the love with which you look at us, little one. Happy 6 months to us three.”

On the work front, Anushka has announced her next project as a producer earlier this year which is a Netflix original series titled Mai.