Arjun Kapoor, Rhea Kapoor Won’t Let Alia Bhatt Have Even an Ice Cream Peacefully in Switzerland And we Have Proof!

Alia Bhatt walking down a Switzerland slope, eating ice cream is all you need to freshen up your weekend mood. Arjun Kapoor and Rhea Kapoor engage in leg-pulling on the viral picture

The world is surely not all glossy with love but actress Alia Bhatt can convince, or trick us into believing it all the same. While the Kalank star is holidaying in Switzerland, her fans are frequently updated about her activities through her Instagram profile but are left craving for more. Also Read - It's a Girl For Anushka Sharma, Virat Kohli! From Alia Bhatt To Sania Mirza, Celebs Pour In Their Congratulations!

Taking to her social media handle recently, Alia uploaded a picture of hers where she can be seen walking down a cobbled slope in Switzerland with her white flowy robe giving solid summery feels. Wearing cute white rimmed sunglasses to complete her look, Alia walked down eating an ice cream with a cane basket in another hand. She captioned the picture as, “In a world full of hate, BE LOVE – – oh & eat ice cream” (sic). Also Read - Deepika Padukone Birthday Party Photos: Ananya Panday, Ishaan Khatter, Alia Bhatt, Ranbir Kapoor, Karan Johar, Others Attend Actor’s Bash

Alia is apparently on a holiday in Switzerland with beau Ranbir Kapoor. Giving airs to the rumours of them getting married at Lake Como, actor Arjun Kapoor commented on the picture, “Where’s the lake?” while Rhea Kapoor instantly had ice cream cravings as she commented, “Damn you bhatt im gonna think about ice cream all day now” (sic) while mommy Soni Razdan was all hearts. 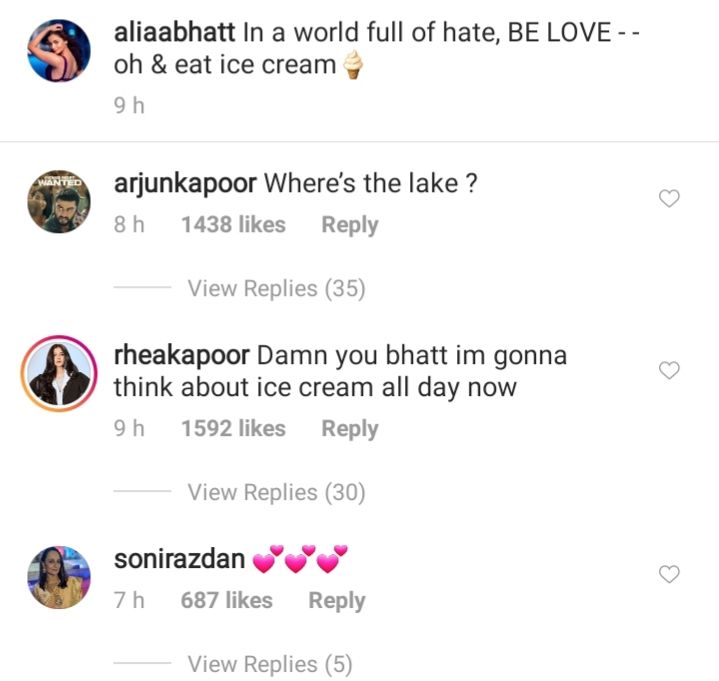 On the professional front, Alia was recently seen in Kalank with Madhuri Dixit Nene, Varun Dhawan, Sonakshi Sinha, Aditya Roy Kapur and Sanjay Dutt. The film released on April 17 and surpassed the opening day collection of Kesari, Gully Boy and Total Dhamaal and became the highest opener of 2019. Kalank is a period drama set in the 1940s, in the era of India-Pakistan partition. The team even traveled to Kargil to shoot a few scenes. Along with the varied hues of love, the period drama highlights the trials and tribulations of love with the spotlight on communal tensions.

She will soon be seen in Ayan Mukerji’s Brahmastra which also stars her rumoured boyfriend Ranbir Kapoor.