Arjun Rampal takes to Instagram to post a beautiful picture of himself posing with Gabrielle Demetriades. This is Arjun's third child after Mahika and Myra.

Actor Arjun Rampal has announced that his girlfriend Gabrielle Demetriades is pregnant and the couple is expecting their first child. Arjun posted a beautiful picture of himself posing with Gabrielle and revealed the news in the caption. In the photo, he can be seen sitting with Gabrielle lying in his arms. The gorgeous designer is seen wearing a satin gown, flaunting her baby bump. The caption on Arjun’s post reads, “Blessed to have you and start all over again….thank you baby for this baby 👶🏽” (sic) Also Read - Arjun Rampal Recovers From Covid-19 In Just 4 Days, Urges People To Get Vaccinated

The news of Gabrielle’s pregnancy comes as a surprise to many. While the couple was clicked by the paparazzi a few days back, they managed to hide the baby bump. However, when you go back to see those photos after the announcement now, you can notice that the baby bump is visible. Arjun and Gabrielle visited a popular restaurant in Mumbai recently and tried to cover the baby bump by carefully holding the bags. While Arjun was dressed in a basic t-shirt and track pants, Gabrielle wore a comfy jumpsuit. Here are their pictures: Also Read - Why is NCB Not Giving a Clean Chit to Arjun Rampal in Drugs Case - 5 Important Points 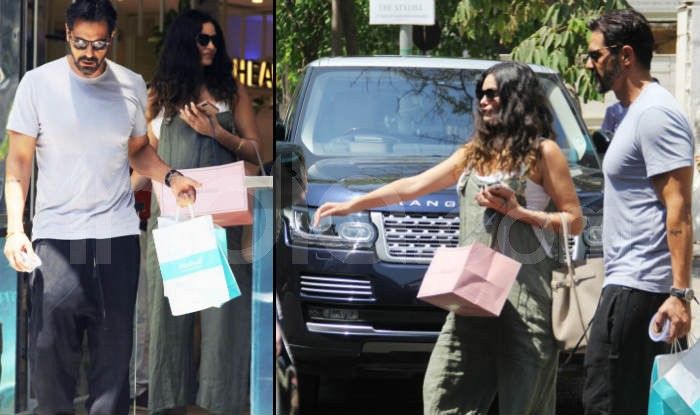 Arjun and Gabrielle are in a relationship since very long. However, they started giving public appearances only after a few months since the actor announced his divorce from ex-wife Mehr Jesia. Even though none of them came out in open and officially talked about their relationship in the media, their gesture and body language always confirmed their chemistry.

Arjun and Mehr announced their separation last year with an official statement that said that it’s a mutual decision. The industry insiders, however, revealed that the couple has been dealing with a broken relationship for many years before that and they were just waiting for their two daughters to come to terms with it. Now, with Arjun’s announcement about becoming a father once again, it’s just easy to understand that he has moved ahead in life.

Our congratulations to the couple!