You can be a huge celebrity with thousands crushing over you but you still gotta need your girlfriends’ validation every time you put out a new look and seems like Diana Penty just succeeded in winning that as Bollywood divas Athiya Shetty and Patralekhaa swooned over her latest hot avatar. The Happy Phirr Bhag Jayegi star not only set the temperatures soaring across the Internet with her sexy look but also had her girl gang rooting for her hotness which is typical of all girlfriends ever. Also Read - Malaika Arora Stuns in a Tiny Blouse-Skirt Set for Arpita Mehta, Fans Call Her 'Burning Hot'

In the picture that Diana shared on her Instagram handle, the diva can be seen donning a bright red frilly saree with a sultry strap blouse and posed before a backdrop of mirrors that exposed different angles of her in the six yards ensemble. Striking a sensuous pose, Diana simply captioned the picture with the emoji of the dancing lady and Athiya and Patralekhaa immediately smeared the comments section with “hotttt (sic)” appreciation and fire emojis. Also Read - Athiya Shetty Gets The Cutest Birthday Wish From Rumored Boyfriend KL Rahul 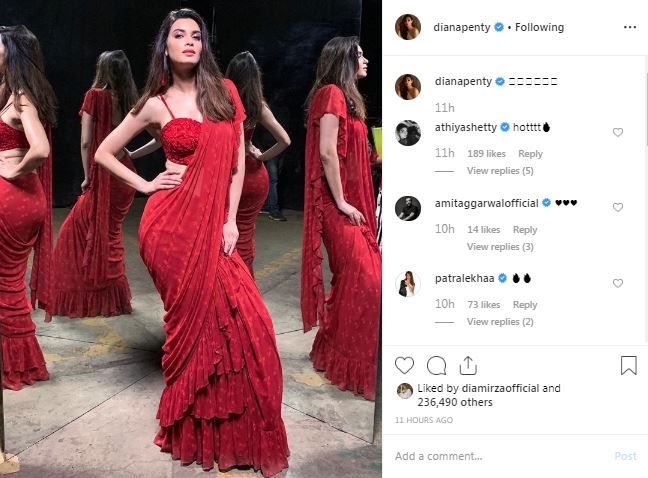 On the professional front, Diana will be seen in a love story titled Shiddat-Journey Beyond Love with Sunny Kaushal, Radhika Madan, and Mohit Raina. While Radhika is paired opposite Sunny, Mohit will be seen with Diana in the film produced by Dinesh Vijan, who has delivered three hits Hindi Medium, Stree and Luka Chuppi. Directed by Kunal Deshmukh, the film will go on floors in September and will be shot across Punjab, Paris, and London. According to a source, the story has been written by Sridhar Raghavan and Dheeraj Rattan.

Dinesh had earlier said in a statement, “I got married recently, so I’m feeling it, but on a serious note in our day and age where love is taken so lightly, it’s difficult to imagine the lengths people would go to for it”.

“‘Shiddat’ is a not only a story about love but the distance one travels for it. The passion that overcomes… Maybe all senses or logic to do things that you wouldn’t usually imagine, the belief in something with all your heart and the drive to achieve it- that’s ‘Shiddat’,” he added.