Attack: Jacqueline Fernandez cannot hold back her excitement as John Abraham starrer goes on the floors, Abhishek Bachchan sends in his wishes

Taking to his Instagram handle, John shared a picture of the clapper from the sets on the first day and captioned it, ““Attack” Shoot begins !!! . (sic).” Quick to comment, Abhishek wrote, “All the best baba. (sic) while Jacqueline quipped, “Here we go!!!! (sic)” Also Read - Happy Birthday Karan Johar: Sonam Kapoor, Manish Malhotra, Rakul Preet Singh And Others Pour in Wishes as Filmmaker Turns 48 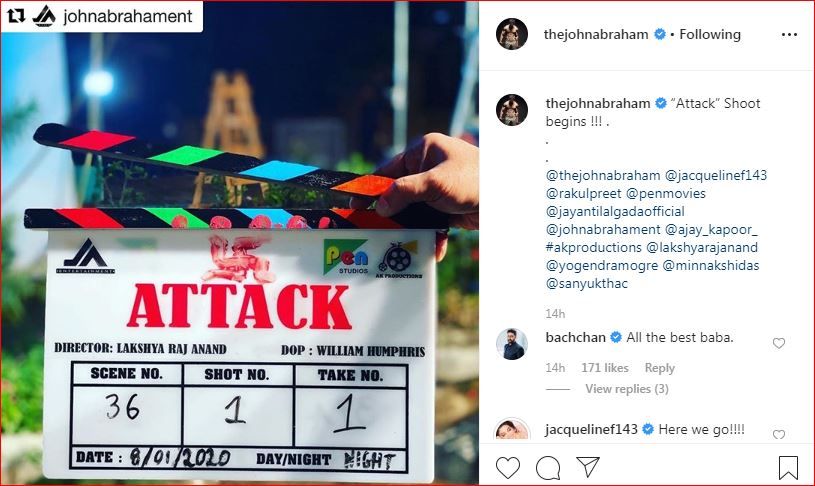 Back to the patriotic turf, John had earlier shared in an interview, “‘Attack’ is a taut, interesting thriller with a strong storyline and a genre I love! That it is releasing on Independence Day makes it even more exciting. At (John’s production house) JA Entertainment, it is our endeavour to push the envelope and produce films that entertain and have something significant to show to the increasingly discerning audience.”

Touted to be an action drama revolving around a rescue operation by a team led John, Attack is inspired by true events. The fictional plot is set against the backdrop of a hostage crisis situation. It is interesting to note that this will be the third year consecutively where John has grabbed the Independence Day weekend after Satyameva Jayate opened on August 15, 2018 and Batla House released on August 15 this year.