Salman Khan and Katrina Kaif show a hint of a smile on the fifth official poster of Ali Abbas Zafar-directorial, Bharat

The team of Bharat has released a new poster, the fifth one in line – featuring Salman Khan and Katrina Kaif. The poster dates back to the year 1990 and shows both the stars flaunting a hint of a smile. The poster was first shared by Salman on social media. The caption of his tweet added more beauty to the poster. The actor wrote, “Har muskurate chahre ke peeche dard chupa hota hai aur wahi dard aapko zinda rakhta hai! 💪🏻 #BharatKaVaada” (sic) Also Read - Need Some Fitness Motivation? These 5 Bollywood Celebrities Will Inspire You to Hit the Gym Right Away

The promotional campaign for the film looks interesting. The makers have decided to launch different avatars of Salman from Bharat with each poster. The previous four posters showed the actor’s look from 1985, 1970, 1964 and 2010. Each poster revealed the significance of another actor apart from Salman in the film.

While it was Disha Patani with Salman Khan in the poster from 1964, Jackie Shroff and Sonali Kulkarni were seen in the very first poster showing Salman flaunting a salt and pepper look. The last three posters revealed by the film’s team show Katrina in her curly hair look. 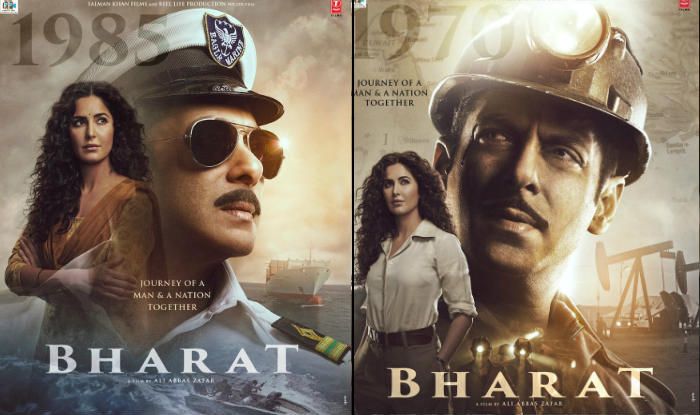 Director of Bharat, Ali Abbas Zafar, has also shared a behind-the-scenes still from the film. The caption on his post reads, “Men at work @Bharat_TheFilm . On set..” (sic)

Bharat also features Nora Fatehi and Sunil Grover – the glimpses of their characters haven’t been given away in any poster yet. The film, directed by Ali Abbas Zafar, is an official remake of Korean drama Ode to My Father. Produced by Salman Khan and his brother-in-law Atul Agnihotri, Bharat is the big Eid release this year. It’s slated to hit the screens on June 5.