Bhumi Pednekar: I am a Hero in This Male-Dominated Industry | Exclusive Interview

Bhumi Pednekar says that it's high time the audience starts giving a female-driven movie the same love and importance that they give to a solo male entertainer. The actor talks about being a 'hero' and breaking the stereotypes.

Actor Bhumi Pednekar has never feared going all out with her characters and walking the unchartered territory. In her first film itself, she played the role of a woman who didn’t fit the societal definition of beauty, and in Saand Ki Aankh, she played an octogenarian who puts India on a world map by participating in sharpshooting competitions. All these roles had Bhumi emerge as one of the strongest screen performers who bring out the best balance of content and entertainment for the audience. Years after her debut in Bollywood, Bhumi features in her first solo entertainer titled Durgamati. This is the first film that she is carrying solely on her shoulders.Also Read - Tisca Chopra: Actor is as Vulnerable as a Delicate Piece of Glass Sculpture | Exclusive Interview

In an interview with india.com, she talks about the responsibility that comes with shouldering a film all by herself, her problem with defining actors on the basis of their gender, and how she’s here to break the perception around female-driven cinema. Excerpts: Also Read - Shefali Shah: Rapists Deserve Capital Punishment | Exclusive

Your character in Durgamati is almost a goddess-like character, it’s powerful in its appearance. Does it empower you as a woman? Also Read - Vidya Balan: I am a Feminist Work-in-Progress | Exclusive Interview

Absolutely, I feel that the fact that I could do this film and I am shouldering it is definitely is empowering. The thing about Durgamati is that… there’s this notion that whenever there’s a female lead helming the film, they automatically put it in a certain category. The biggest reason I did this film is that it has given me an opportunity for a lifetime. I have only seen my male counterparts pull off roles like this – a character which is so larger than life and has a huge presence and it’s a large canvas – there’s drama, emotion, suspense, romance, and a whole bunch of everything. For a woman to get this opportunity earlier on in her career is definitely very empowering to me. 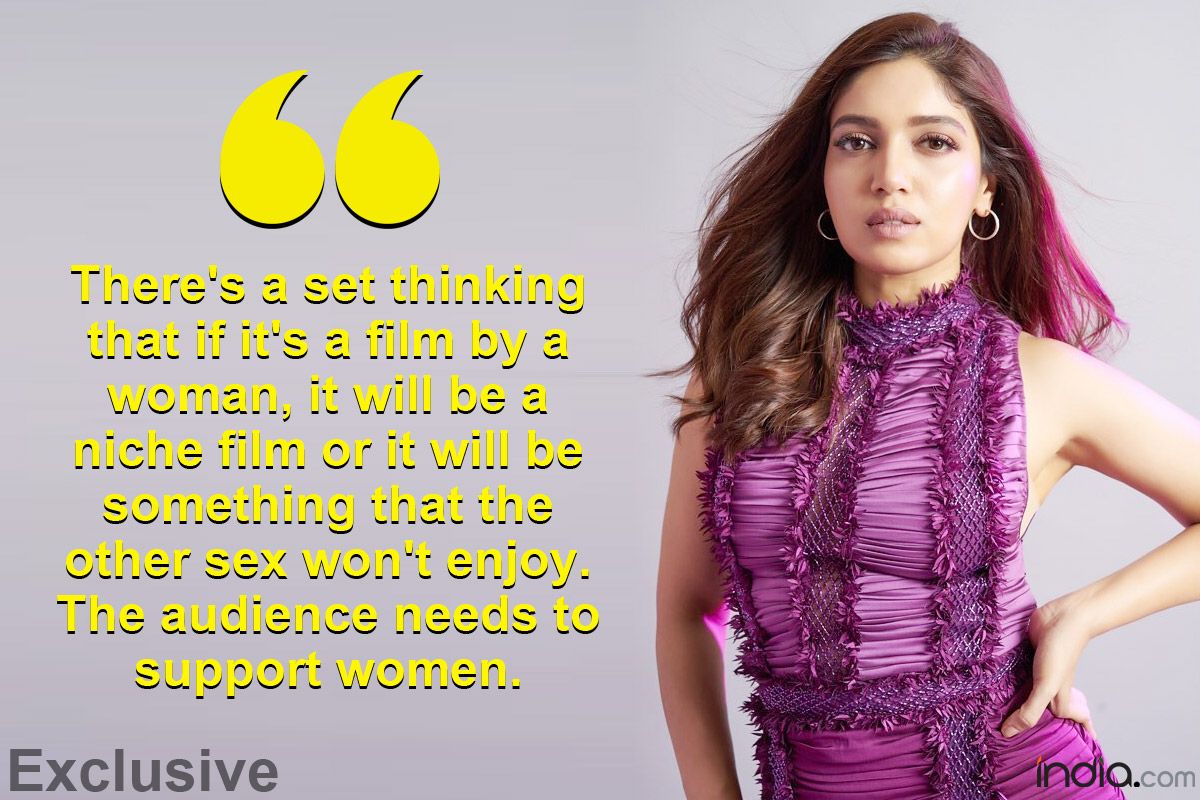 Would we see you doing roles where all you need to do is dress up, look pretty and not worry about anything else… a breather or a candy-floss cinema?

Absolutely, I would never limit myself to do anything. I am very simple. My film and what I want out of my movies is the character that can be remembered. I need enough meat in a part to do that film and I want my films to entertain. I did Pati Patni Aur Woh which is an out-and-out massy entertainer but my fans remember every saree I wore… the kind of impact that Vedika Tripathi had on people was immense and that’s the reason I did the film because I found that the film had that balance that I usually look for in my work.

Do you think that horror as a genre is still very stereotyped in India and how do you see that changing with the new minds coming in?

I think the way it’s happening is more with the technicality of it. Usually, where the narrative is concerned and also from the everyday sighting, you have horror elements in places that are kind of delipidated or far off, alone — but technically I feel that in terms of visual effects, video, the way we use our VFX – that’s where I feel we are getting stronger. 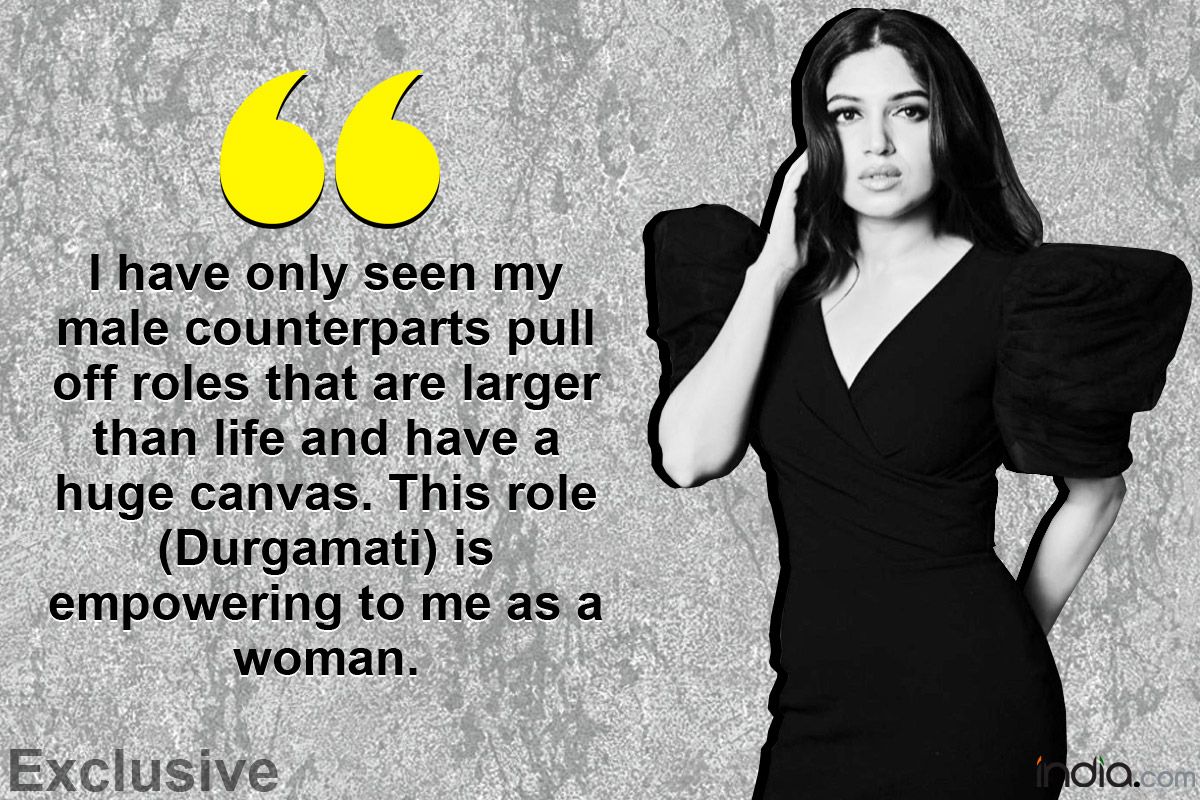 During the release of Saand Ki Aankh, Taapsee Pannu made a very strong statement when she said that it’s important for female actors to push for their solo films as big festival releases. Do you think with actors like you and Taapsee we can finally see that day when female-driven films are getting festive releases?

We are not competing with each other. For us, it doesn’t matter if we are male or female. We are all actors. Saand Ki Aankh came on a Diwali and we were on the front foot promoting that film. We are on the front foot just doing what we are supposed to do. But the kind of response that we want our film to get will only happen if the audiences realise that it’s important to go out there and support our film. It’s extremely important. We are working so hard to bring in entertainment for fans and the audience. There’s a set thinking that if it’s a film by a woman, it will be a niche film or it will be something that the other sex won’t enjoy. That’s not true.

Durgamati is a film for the family. You’ll enjoy it irrespective of your age or your sex. Even my other works – Saand Ki Aankh was a family entertainer. That is the thing that we also need to talk about.

You go through this extreme physical transformation in most of your characters be it Dum Laga Ke Haisha, or Saand Ki Aankh, and even in parts of Durgamati, you look different. Isn’t it exhausting?

It’s completely exhausting but it’s something that I love doing. This is the one thing that I have enjoyed doing professionally. I always try to give a look at the character that doesn’t remind you of anybody else. Even in Durgamati, I have tried doing that. The idea is to constantly challenge myself, push boundaries, to give the audience something new and excited everytime they come to watch a film that I am in.

Have you had your spooky experiences?

I have none. I hope I have none because I really believe that these energies are there and they are around me. I truly respect them.

What if Bhumi was a ‘hero’ in this male-dominated industry?

I am a hero in this male-dominated industry. I don’t think there’s an ‘if’. That’s the attitude that we all need to have because as I said an actor is an actor. I think we need to stop defining an actor by our gender because we put in as much hardwork as our male counterparts. And I feel very fortunate to be present at a time where there are such stories written that can be held by a woman and to have co-actors that believe in equality towards the other gender as well.