Ram Charan will be making an extended guest appearance in the movie which has his father Chiranjeevi in the main lead.

Acharya Update: Starring megastar Chiranjeevi and his son Ram Charan, one of the most awaited films of the year, Acharya nears its completion. As per the latest reports, the production house informed that the shoot of only two songs are yet to be completed. However, with this, a picture of the father-son duo from the sets of the film is now going viral on social media. In the picture, Chiranjeevi and Ram Charan can be seen twinning and striking a pose in all olive, forest camouflage outfits.Also Read - Ram Charan Becomes The Brand Ambassador of Disney HotStar, Can You Guess Whopping Amount He Charged?

Although there are a lot of pictures of the renowned duo on the Internet, this seems remarkably special because this is for the first time Chiranjeevi and Ram Charan are coming together in full-fledged roles. A number of fans took to social media sharing the picture and expressing excitement as this is the first time that Chiranjeevi and Ram Charan are coming together on-screen with their mega roles. Also Read - Sai Dharam Tej Health Update: Actor Likely To Undergo Surgery, Chiranjeevi, Ram Charan, Pawan Kalyan Visit Him 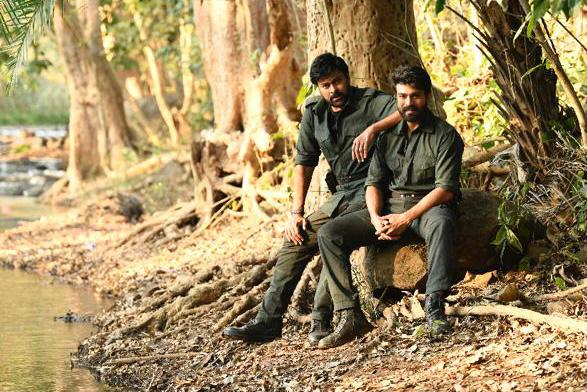 Earlier in March, Chiranjeevi took to Twitter wishing his son Ram Charan on his 36th birthday and released a poster of Acharya. Also Read - RRR Released Postponed: Ram Charan, Jr NTR Starrer NOT To Release On October 13 | Here's Why

Acharya which is an action drama is written and directed by Koratala Siva and is being produced by Ram Charan and Niranjan Reddy under the Konidela Production Company and Matinee Entertainment banners. Ram Charan will be making an extended guest appearance in the movie which has his father Chiranjeevi in the main lead. The film also stars Pooja Hedge, Sonu Sood and Kajal Agarwal in lead roles.

The movie was initially supposed to release in May, but it was then delayed due to coronavirus restrictions. The new release date will be announced soon.