Varun Dhawan and Sara Ali Khan starrer Coolie No 1 has now become the worst-rated Bollywood movies of all times and has managed to get a rating of 1.4 on IMDb, placing it just below Sanjay Dutt starrer Sadak 2, which has got the rating of 1.1 on the website. The film has been rated 1 (out of 10) by more than 15,000 users on IMDb.Also Read - 'RIP Physics, Logic'! Varun Dhawan's Scene From Coolie No 1 is The Latest Target of Memes, Clip Goes Viral

Nonetheless, the film has also become the most-watched film on an OTT platform in India in the first 24-hours of its release. Interestingly, the Varun Dhawan film is currently tied with KRK’s Deshdrohi (1.4) while Ajay Devgn starrer Himmatwala is rated 1.7 and Salman Khan’s Race 3 has a rating of 1.9. Also Read - Coolie No. 1 Twitter Review And Memes: Netizens Give '1 Star' to Varun Dhawan-Sara Ali Khan's Film 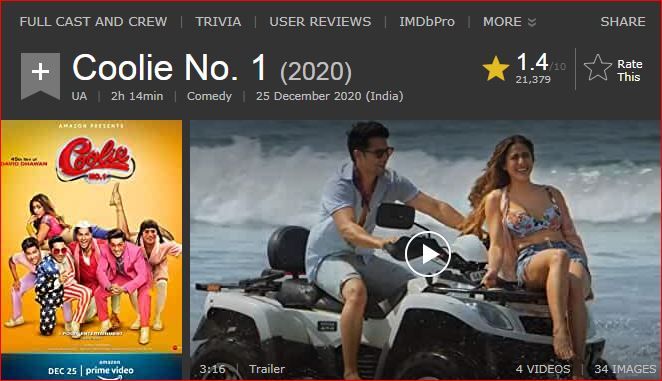 The film faced a lot of backlash from social media users on the day of the film’s release. A particular scene from the film defying all laws of physics even became the topic of discussion on Twitter leading to hilarious memes. In the scene, Varun can be seen running atop a moving train and jumping off it in a nick of time to save a child. The actor runs faster than the train, sprint on its coaches and then make it safely to the track to save the child.

Coolie No 1 released this Christmas on Amazon Prime. The film stars Varun Dhawan, Sara Ali Khan, Paresh Rawal, and Jaaved Jaaferi, among others. This is the 45th directorial film of David Dhawan, who also helmed the original film starring Govinda, Karisma Kapoor, and Kader Khan in the lead roles. The film has not received positive reviews from the critics and audience.