Couple That Eats Pizza Together! Priyanka Chopra And Nick Jonas Take Their Love to Balcony at Cannes 2019

Priyanka Chopra and Nick Jonas share their pizza after walking the red carpet looking all gorgeous at the Cannes International Film Festival 2019.

Actors Priyanka Chopra and Nick Jonas never fail to give couple goals to their fans all over the world. They did just the same during their stay at the French Riviera while attending the Cannes International Film Festival 2019. After walking the red carpet in all glory, the couple headed back to their hotel room. But, they continued to display affection for each other. In a picture that’s going viral on social media, Nick is seen holding a pizza slice for his wife Priyanka as the couple does some PDA on the balcony of their room. Check this out: Also Read - Kangana Ranaut Launches Fresh Jibe at Diljit Dosanjh, Priyanka Chopra, Says 'You Need To Explain This'

These tiny moments between PC-Nick speak volume of their adorable chemistry. Even at the red carpet, Nick displayed a gesture of chivalry by holding an umbrella for his wife as heavy rains hit the French Riviera on day 5 of the Cannes 2019. The couple posed for the shutterbugs at the red carpet and Nick kept holding the big black umbrella without shying away from the media present around. Check out these pictures: 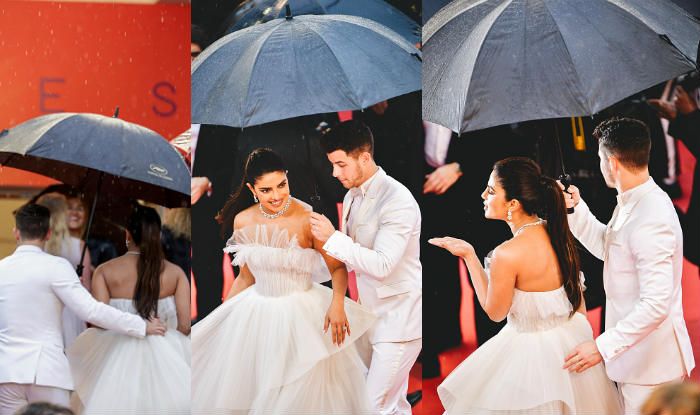 For her second appearance this year, Priyanka chose to flaunt a tulle white outfit from Georges Hobeika. Brown lips, matching eye makeup and a sleek ponytail finished her look for the day. She added a gorgeous diamond neckpiece to her look and twinned with her husband who also wore white at the red carpet. Together, Nick and Priyanka cut a striking picture at Cannes 2019.

The Quantico star was representing luxury jewellery brand Chopard at the event. Even at her previous outing where she wore a black strapless outfit by Roberto Cavalli, PC added a pair of statement earrings from the brand. A pair of pink drop-diamond earrings from Chopard was her choice of jewellery to go with at the Met Gala 2019 as well.