Ever since Deepika Padukone and Ranveer Singh tied the knot last year, the couple is not shying away from displaying their affection for each other on social media. Recently, the couple commented on a picture from their wedding and was all praise for each other. Also Read - RRR Turns Bigger With Dussehra Release This Year, Ram Charan-Jr NTR Come Together in New Poster

Deepika and Ranveer have each others back and have always supported each other in every way possible. In a picture from their wedding shared by some fan page, Deepika commented saying, “tera time aa gaya baby..” Husband Ranveer replied by saying, “tu jo mil gayi mujhe …”. Also Read - Deepika Padukone all Set For Her Second Hollywood Venture as She Signs With Talent Agency ICM 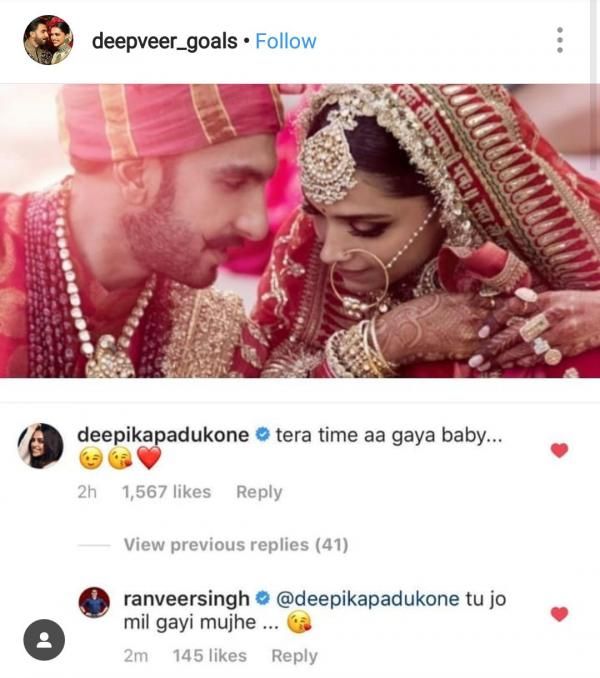 The two are head over heels for each other and it is pretty evident from their posts. Earlier today, when Ranveer was giving an interview to India Today, his wife Deepika called him on FaceTime and said, “Hi baby, you are looking handsome.” Before tying the knot, the couple dated for many years but did not make their relationship official until their marriage. Now that the two have exchanged vows, they just cannot get enough of each other and do not shy away from praising each other. Also Read - Did Pathan Director Siddharth Anand Slap His Assistant On Set of The Film? Know The Truth Here

Earlier when Pinkvilla asked the Padmaavat actor on how felt about Ranveer becoming her husband, she revealed, “I think soon after the ceremony was done. The minute we held hands it was different. It was not like holding my boyfriend’s hand; he’s your man for life. Almost, instantly it happened”.

Ranveer and Deepika got married in two ceremonies – Sindhi and Konkani in a private ceremony in Lake Como. Post that, the couple hosted two receptions, one in Bangaluru and the other in Mumbai.

On the professional front, while Ranveer is gearing up for the February 14 release of his upcoming film Gully Boy which is directed by Zoya Akhtar and also features Alia Bhatt, Deepika will soon start shooting for her upcoming film Chhapak. The film will be directed by Meghna Gulzar and also features Vikrant Massey and is based on acid-attack survivor Laxmi Aggarwal.