Veere Di Wedding has been doing exceptionally well at the box office.

On Friday, Kareena Kapoor Khan, Sonam Kapoor Ahuja, Swara Bhasker and Shikha Talsania’s Veere Di Wedding hit theatres. And, the film has been doing exceptionally well at the ticket windows. In just two days, the film has made Rs 22.95 crore. The film has become the third highest opener of 2018 and the cast of the film is really excited about it. Sonam took to social media and posted her excitement saying, “Veere Di Wedding opens to 10.70 Crores on day 1! Third highest opener this year for a film without a hero and an adult rating! Clearly, the future is female!”Soon Deepika Padukone posted a congratulatory message. Also Read - Deepika Padukone Reunites With Shah Rukh Khan For Pathan, To Start Shooting Today

Yes, it happened. DP replied to the post saying, “Congratulations!& can’t wait to watch the film!” Well, it’s such a welcome change to see actresses bond like this. At one point, Sonam and Deepika were good friends. They had appeared on Karan Johar’s Koffee With Karan and made shocking revelations about Ranbir Kapoor. However, in a later season, the Veere Di Wedding had taken a dig at the Padmaavat actress when she came to the show with daddy Anil Kapoor. She thought Deepika’s style sense is inspired and she has an overenthusiastic PR. Coming back to Ms Padukone’s response, take a look at it below: Also Read - Siddhant Chaturvedi On Working With Deepika Padukone: I Am Living Out Of A Dream In Every Possible Way 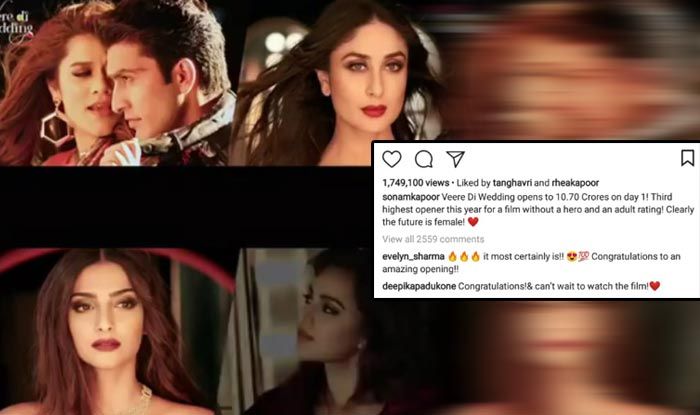 But seems like all is well between the two actresses now. Sonam had recently invited the actress to her wedding. However, she couldn’t make it because she had already left for the Cannes Film Festival 2018 by then. Back to Veere Di Wedding, the film is expected to create a dhamaka at the box office on the opening weekend thanks to positive word of mouth. Keep watching this space as we’ll be the first ones to bring you the box office numbers of Veere Di Wedding.