Deepika Padukone's witty acknowledgment of Amul's tribute to her Cannes look wins fans hearts, Ranveer Singh's comments turn out to be even wittier!

The recently concluded Cannes Film Festival apparently kept our diva Deepika Padukone‘s hands full as she slew in one look after another. Hence, it was but acceptable that the Chhapaak actress missed the tribute that the milk and dairy brand Amul gave her through their recent advertisement but not for long. Taking to her Instagram handle, Deepika acknowledged Amul’s love and appreciation of her look in a green neon gown at the 72nd Cannes Film Festival and reposted the cartoon along with a post in the company’s witty caption-making skill. Also Read - Amul's Latest Meme After IPL 2021 Gets Suspended Amid Covid-19 Surge is Going Viral | POST

The caption read, “now this truly is the icing on the cake…or more like butter on toast!(with a cherry on top)” (sic) and the post instantly went viral, garnering over 8 lakh likes. Also Read - Deepika Padukone Tests Covid-19 Positive After Her Family Contracts The Virus

now this truly is the icing on the cake…or more like butter on toast!(with a cherry on top)🤪

While the fans cracked up at Deepika’s witty caption, Ranveer Singh’s comments left them in splits. “Literally raising a toast… Literally, I got to say… That’s prety clever” wrote Ranveer apart from other back-to-back comments on his wife’s post. 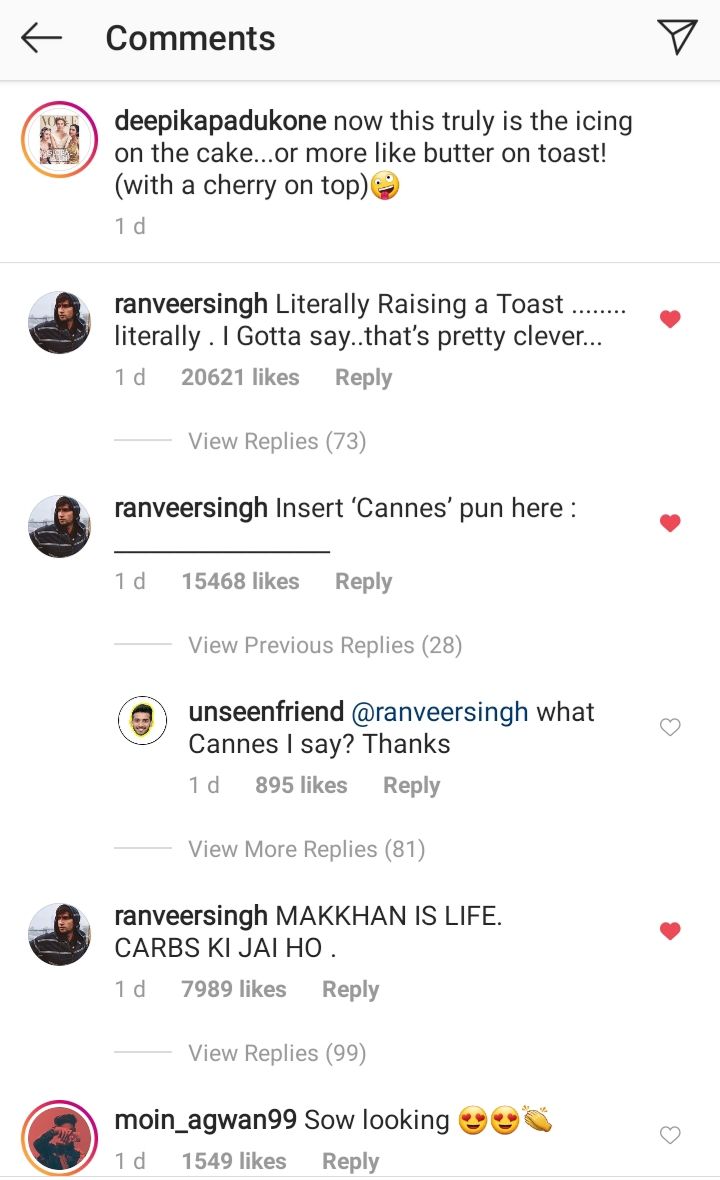 Deepika Padukone was all over the social media with her Cannes look in a dreamy ruffled lime gown by Giambattista Valli. This look of Deepika Padukone was risky but we have to say that she nailed the quirky look and struck four funky poses treating fans to her drool-worthy appearance. The Padmaavat actor completed her look with a pastel pink bow and a headgear which amped up her haute couture. It seemed like Deepika took fashion inspiration from her husband and actor Ranveer Singh, who is well known for his diverse fashion choices.

On the professional front, Deepika is currently occupied with the shooting of her next film Chhapaak. The film also stars Vikrant Massey who plays the role of her character Laxmi’s husband.