Stree Producer Dinesh Vijan recently tied the knot with Pramita Tanwar in Mumbai and post their wedding, the newlyweds hosted a cocktail party where many B-town celebrities were spotted. While pictures from his wedding as well as the party has been going viral on social media, we found a picture of the reunited two Deepika Padukone and Diana Panty who worked together in the 2012 film Cocktail.Also Read - Little Boy Rapping to ‘Apna Time Aayega’ Will Make Your Day, Watch Video

Diana who looked pretty excited on meeting her co-star from her debut film Cocktail took a selfie of the two on her Instagram and captioned it “DP DP.” This picture will surely get you flashbacks from their film. Diana made her comeback to Bollywood with the 2016 film Happy Bhag Jayegi. She was then seen in Lucknow Central. Recently, Diana shared screen space with John Abraham in Parmanu: The Story of Pokhran and Happy Phirr Bhag Jayegi with Sonakshi Sinha. Also Read - Ranveer Singh Spills Beans on Getting Tips From Deepika Padukone For TV Debut ‘The Big Picture’ 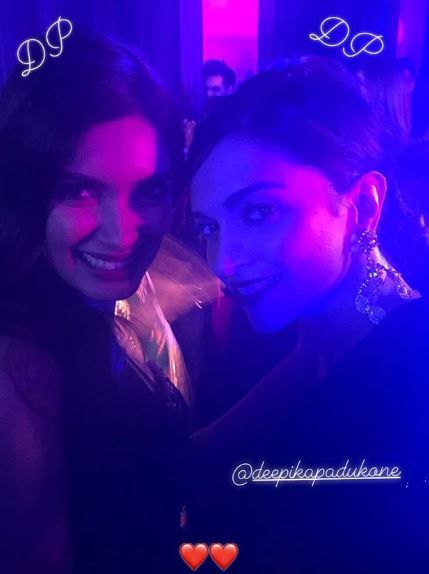 Deepika, on the other hand, tied the knot with Ranveer Singh in Italy’s Lake Como. Post their wedding, the couple hosted two receptions. One in Bangaluru and the other in Mumbai. In their Mumbai reception, many celebs were spotted in their best avatars. Ranveer and Deepika, being the humble souls they are, took a picture with the paparazzi which got viral in no time. Ranveer, on the other hand, is gearing up for the release of his upcoming film, Simmba with Sara Ali Khan. On the other hand, Katrina’s Zero is all set to hit the screens on December 21. The film also features Shah Rukh Khan and Anushka Sharma in pivotal roles. It is directed by Anand L Rai. Also Read - Ranveer Singh's Latest Cryptic Post on Nepotism Grabs Attention From Celebs And Fans | Check it Out