Actor Kangana Ranaut has been summoned by the Mumbai Police in a defamation case filed by the lyricist Javed Akhtar at Andheri Court. She has been asked to appear before Juhu police officers, who are investigating the case, on January 22. On December 19, the court had asked Juhu police to investigate the defamation case filed by Akhtar against Kangana and submit the report to the court. In the last hearing, the cops sought more time from the court in the last hearing. The police have now initiated investigations in the case and therefore, summoned Kangana for questioning.Also Read - Fact Check: Did You Get An E-mail By RBI Offering Rs 4.62 Crores? Know The Truth Behind It

The sources confirmed that the next hearing is at Andheri Court on February 1, 2021, and the cops will file a report by then. Also Read - Lord Jagannath's Photo On KitKat Wrapper Sparks Online Outrage, Nestle India Says Packs Withdrawn

Kangana reacted to the summon and wrote on Twitter, “Today one more summon for me. Come all hyenas come together…Put me in jail…torture me and push me against the wall with 500 cases.” Also Read - Ram Gopal Varma Tweets About Dhanush And Aishwaryaa's Separation, Calls Marriage a 'Jail' - Check Viral Tweets 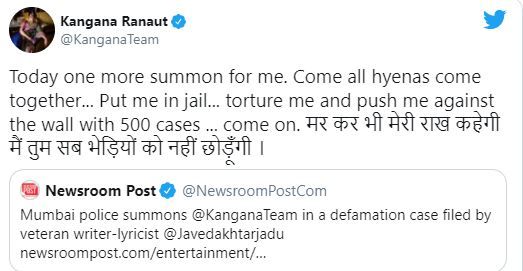 Javed Akhtar had filed a criminal case against Kangana Ranaut for making defamatory statements against him on several news channels. He had claimed that she dragged his name in Sushant Singh Rajput’s case unnecessarily during one of the interviews. He further asked for proceedings against the Dhaakad actor on the basis of the video that has garnered lakh of views on various online platforms. Javed Akhtar has asked for a defamation case to be registered against Kangana Ranaut under IPC sections 499 and 500.

In the interview, Kangana spoke about her conversation with Akhtar at his house, where a doctor was also present. However, Javed Akhtar and Kangana are claiming different things regarding the case. However, the only witness in the case, the doctor, can only reveal what happened exactly as he is known to both Kangana and Akhtar. The court has asked police to question the doctor and attach his statement with the report.