Newlyweds Deepika Padukone and Ranveer Singh, who tied the knot in Italy, were recently spotted at the Mumbai airport as they headed to Bengaluru for their wedding reception. Though there were not many good pictures of their wedding, the paparazzi has not left them alone right from the time they landed in India after their wedding in Italy. While getting clicked at the airport, if one looks closely, you will see something missing. Remember RK tattoo at the back of Deepika’s neck? The tattoo is no more there. Though there are chances that it can be make-up covering the tattoo. Also Read - Sonu Sood Opens His Juhu Hotel For All Healthcare Workers, Calls Them Real Heroes During COVID-19

Deepika looked beautiful in an off-white Anarkali suit. She also wore multilayered gold earrings and simple mangalsutra. On the other hand, Ranveer donned kurta-pyjama with a floral print Nehru jacket. With red bangles and radiant smile, the actress looked perfect as the nayi naveli dulhan. Also Read - Ranveer Singh-Deepika Padukone's Human Version of Mickey And Minnie Mouse Will Leave You in Splits, Here's Why 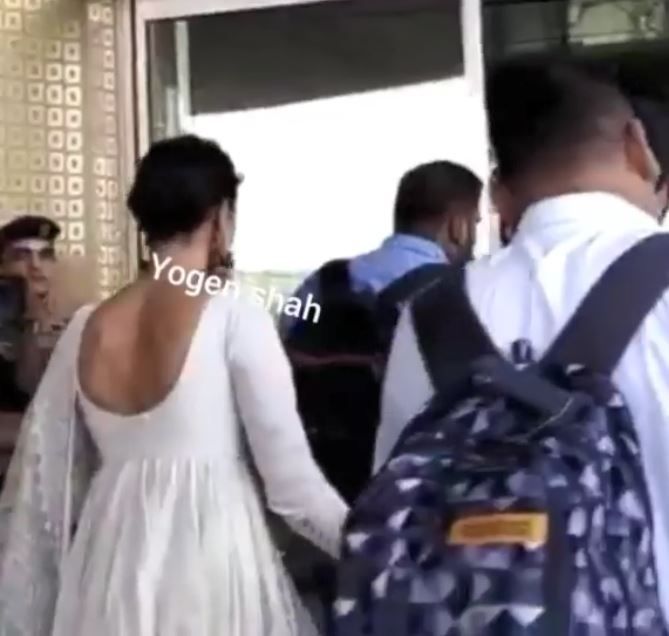 Deepika and Ranveer returned to Mumbai on November 18 after their wedding in Italy. Dressed in Sabyasachi attires, the couple looked wonderful. Ranveer played a doting husband as he was seen saving his wife from the crowd. Also Read - Sara Ali Khan is Back With Her PJs And we Can't Help But Facepalm Along With Ibrahim Ali Khan | Watch

They are set to host another reception in Mumbai which will be attended by many renowned faces of the silver screen. Now, people are eagerly waiting for their fresh pictures from the upcoming functions.

Their wedding ceremonies took place as per Sindhi and Konkani rituals at Lake Como. Only close friends of the couple became part of the celebration. They strictly followed the no-picture policy.