Controversy’s favourite child Kangana Ranaut is under fire again and this time, the Entertainment Journalists Guild of India has come down hard on the JudgeMentall Hai Kya actor. It all happened at the song launch of Wakhra Swag on Sunday, in the presence of co-star Rajkummar Rao and director Ekta Kapoor when Kangana accused a journalist of starting a ‘smear campaign’ against her by misquoting her on social media during the release of Manikarnika: The Queen of Jhansi. The journalist, however, retorted back by denying her claims and asked her to share any proof to justify what she was saying. Also Read - Kangana Ranaut Calls Hrithik Roshan Her 'Silly ex' Again: Duniya Kahan se Kahan Pahunch Gayi...

In light of this, the media fraternity has demanded a public apology and have decided to boycott Kangana Ranaut. The Entertainment Journalists Guild of India issued an official letter to Balaji Motion Pictures’ chief Ekta Kapoor regarding the same. Also Read - Guess The Price of Janhvi Kapoor's Sparkly Backless Top That Sonam Kapoor Finds 'Hot' 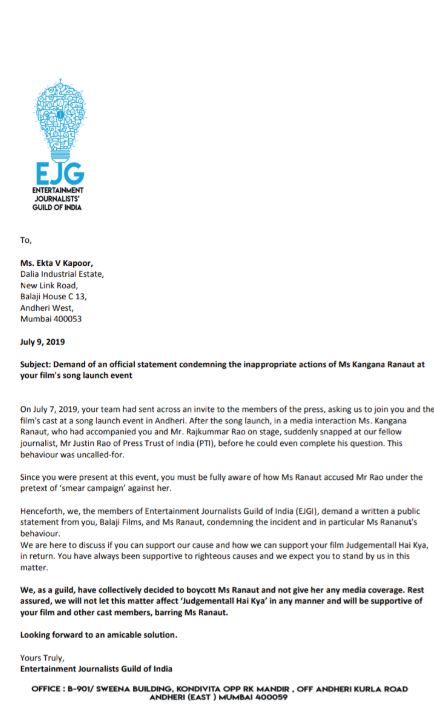 The incident took place on Sunday when Kangana first used unprofessional language and told the journalist ‘tum toh mere dushman bann gaye… badi ghatiya baatein likha rahe ho. Kitni zyada gandi baati likh rahe ho, itna ganda sochte kaise ho?’ To which the journalist said that he is only writing the truth and then told the actor that it’s not fair to say such things to him at this platform. He then asked Kangana to elaborate on her claims.

Kangana accused the journalist of bashing her film Manikarnika. The man then told Kangana to speak with proof. He said, ‘you cannot intimidate a journalist because you are in a powerful position here’. At which point, the anchor interrupted the conversation and got a piece of mind from the rest of the journalists who asked him to not speak in between and insult them when a discussion is already happening. Meanwhile, both Ekta and Rajkummar kept their silence in the matter.