Fact Check: Sushant Singh Rajput’s Father Has Not Demanded CBI Inquiry, He is Not on Twitter

A twitter account in Sushant Singh Rajput's father's name has been surfacing around demanding CBI inquiry in the case. However, a little fact-checking makes things clear.

Various news reports circulating online mentioned that late actor Sushant Singh Rajput‘s father has demanded a CBI inquiry in the matter by making a post on Twitter. A Twitter account in his name also surfaced in which a few tweets mentioned that KK Singh and his family now want CBI to investigate their son’s suicide case. However, upon doing a little fact-checking, it was revealed that Sushant’s father is not on Twitter and the account created in his name is fake.Also Read - Kapil Sharma Abused For Not Posting on Sushant Singh Rajput's Suicide Case, he Hits Back at The Troll

News agency PTI also quoted a source close to the late actor’s family confirming that there’s no account in KK Singh’s name on Twitter and the family doesn’t want any disturbance in Mumbai Police’s investigation process. The source was quoted saying, “He (Singh) has outrightly denied the existence of any such account and urged those behind such things to not create confusion in the public.” Also Read - Sushant Singh Rajput Suicide Case: MNS Chief Raj Thackeray Issues Official Statement 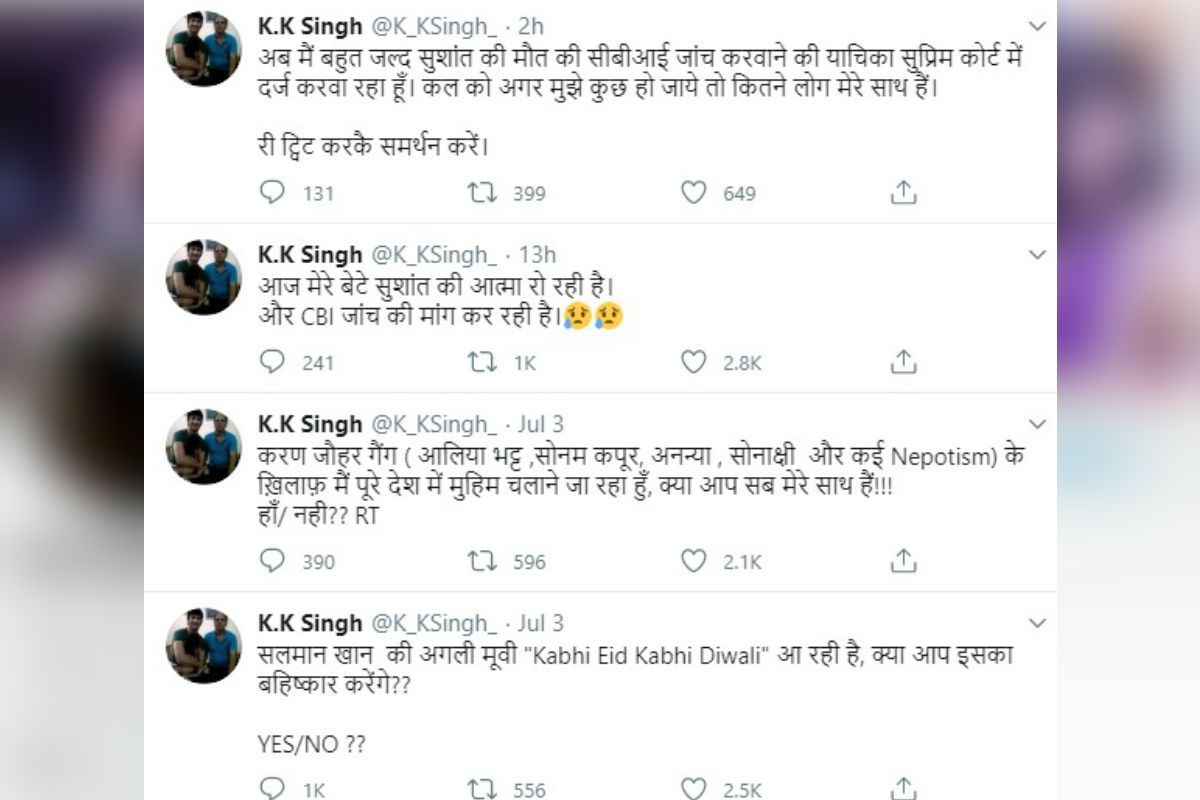 The twitter account in Sushant’s father’s name was created in June, a few days after the actor’s death. Apart from a tweet demanding for CBI’s involvement in the matter, there are several posts on the account slamming Bollywood personalities and demanding a boycott of Salman Khan’s Kabhi Eid Kabhi Diwali. Even though Sushant’s fans and admirers have targetted Bollywood for its prevalent nepotism and favouritism, his family has neither officially spoken against any movie personality nor has demanded a boycott of any movie.

Meanwhile, the Mumbai police have now sent the cloth Sushant used to hang himself to the Forensic Lab for ‘tensile strength analysis’ that will establish whether the cloth found on the late actor’s neck could actually bear 80 kg weight or not. The report is expected to come out in the next three days. Sushant died by suicide by hanging himself to the ceiling fan of his apartment at Bandra’s Mont Blanc building on June 14.