The latest photo of Shibani Dandekar shared by Farhan Akhtar is all adorable but it's his comment on the picture that has our eyes rolling.

Actors Farhan Akhtar and Shibani Dandekar keep social media busy with their lovely photos. The latest picture shared by Farhan is proof of how good their bonding is. The actor posted a cute picture of his dog named Jimbo resting comfortably on what seems like Shibani’s leg. Even he himself can be seen sitting alongside in the frame. The caption on the photo reads, “Jimbo #jimstagram #doglover #takeapaws” (sic). Now, the dog looks adorable and Farhan looks busy in watching something. But, it’s the comments on the photo that show how wonderful is the camaraderie between Farhan and Shibani. Also Read - 'Breathe With Me'! Farhan Khan, Shibani Dandekar's Loved-Up Underwater Pictures Are Full of Romance

Check out the post here: Also Read - Javed Akhtar on if He Finds His Children Smoking Marijuana: I Would Tell Them Not To Do It, It's Not Right 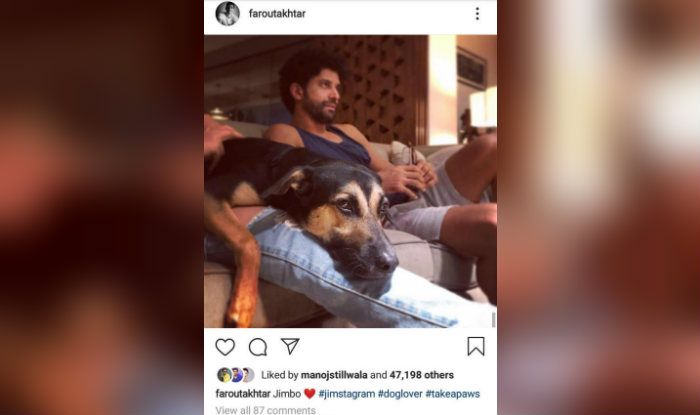 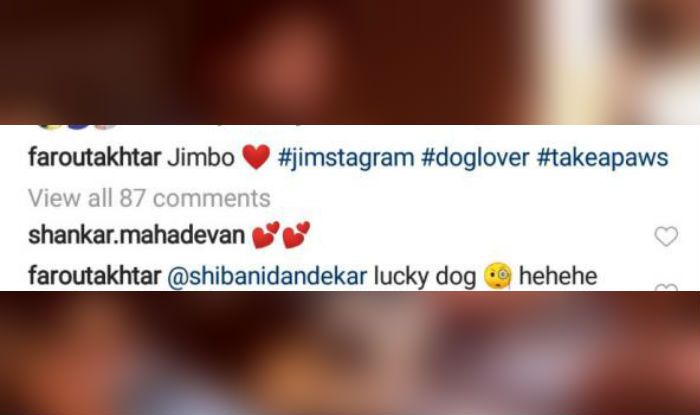 These two just look so much in love! Recently, the internet was abuzz with the cozy pictures of the couple. Farhan and Shibani went on a Mexican holiday last month and while both of them shared a few pictures from their happy holiday, none of the pictures had them sharing one frame. In the photos that circulated a few days back, the two actors were seen sharing cuddles, and just not letting go of each other while in and around the beach. In one photo, the couple seemed in a playful mood. Here are the posts:

EXCLUSIVE: Bollywood “IT couple” Farhan Akhtar and Shibani Dandekar showing off their hot bodies in the Caribbean waters of Tulum, Mexico. The two were enjoying some sandy PDA as they celebrated their one year dating anniversary. . . MORE PHOTOS – HEAD TO LINK IN BIO @faroutakhtar @shibanidandekar

The speculations are rife in the industry that Farhan and Shibani are going to tie the knot soon this year. In fact, during his latest appearance on a chat show, both the actors pulled each other’s leg when the question of their marriage popped up. Also present on the show was actor Bhumi Pednekar.

When Shibani asked Farhan, “Hey Farhan, are we getting married in April or May? Can you please let me know because I am very confused,” he answered, “I think she is having a lot of fun with a lot of news that is going around currently, about us looking for wedding planners.” Bhumi jumped in between the conversation and asked Farhan, “Are you though?” To which Farhan replied, “It maybe April or April be ‘May’.”