Shibani Dandekar gets 'caught' on beau Farhan Akhtar's camera and her guilty expression is too cute to miss, viral video cracks up VJ-sister Anusha Dandekar

It is not just our parents who have been vouching that cellphones at large have destroyed our social life but also us and our partners have the same complaints about each other and filmmaker-actor Farhan Akhtar is no different as he “caught” girlfriend Shibani Dandekar choosing her gadget over him. Documenting the move in a hilarious video, Farhan not only left fans in splits but also cracked up Shibani’s VJ-sister Anusha Dandekar who couldn’t help but feel sorry for him.Also Read - Farhan Akhtar's Intense Gaze And 'Toofan'i Entry Into Weekend is All The Motivation You Need to Grind

Taking to his Instagram handle, Farhan recently shared a video where Shibani can be seen seated across him in an exotic location and busy on her phone. She throws the gadget down immediately when she realises she’s being recorded, the guilt immensely evident on her face. Farhan captioned the video, “Caught @shibanidandekar #tulumthrowback #traveldiaries (sic)” and Anusha immediately consoled him saying, “Haha well atleast we don’t have to feel bad at all now, it’s not only with us! @apekshadandekar @faroutakhtar welcome (sic).” Also Read - Farhan Akhtar's Birthday Post For His 'Boy' as he 'Turns 3' Sets Fans Gushing Over Paw-fect Picture 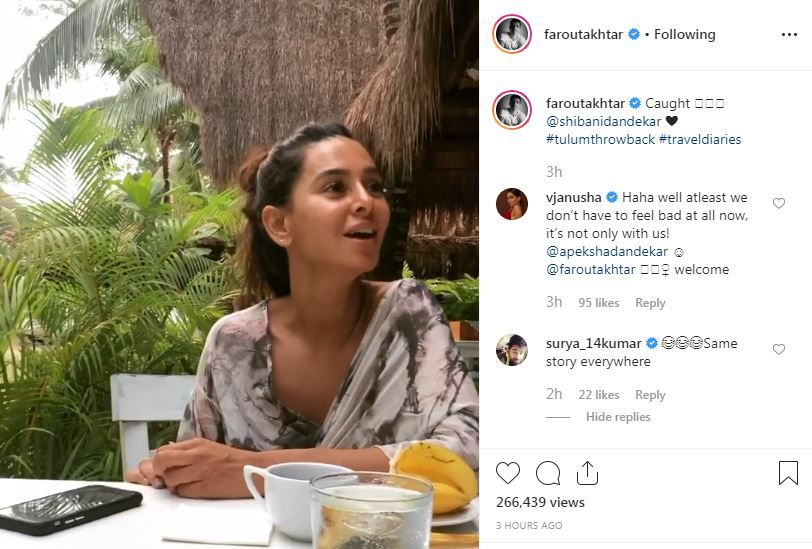 Actor Farhan Akhtar and girlfriend Shibani Dandekar always grab attention with their social media PDA. The two are love-struck and keeps gushing over each other. While they keep their fans entertained with their pictures, neither Farhan nor Shibani has come out in open to talk about their relationship even though they have been dating for a long time now.