Here are the latest pictures of Farhan Akhtar posing outside the hair studio of his ex-wife Adhuna Bhabani. Both of them avoided getting clicked together.

Actor Farhan Akhtar was clicked by the paparazzi making a visit to her ex-wife Adhuna Bhabani‘s salon in Mumbai. The photographers caught the actor coming out of BBlunt, a hair studio co-founded and owned by Adhuna. While the two avoided getting clicked together, Farhan stopped and smiled for the paparazzi and Adhuna followed. Also Read - 'Mirzapur 3 Won't be Released', Warns Advocate Who Filed Plea Against Amazon Prime Video Show in Supreme Court

The actor, who is currently preparing for his upcoming film Toofan, looked stylish wearing a bandana, a grey printed t-shirt, pants and a pair of red shoes. Adhuna, too, kept it striking in a pair of monsoon boots and a denim-on-denim look. Both Farhan and Adhuna looked happy in their own spaces and didn’t seem to have any hint of awkwardness. Check out their latest pictures here: Also Read - No Slang, Less Violence! Mirzapur Makers To Revamp Show With Major Changes, Likely To Change Title 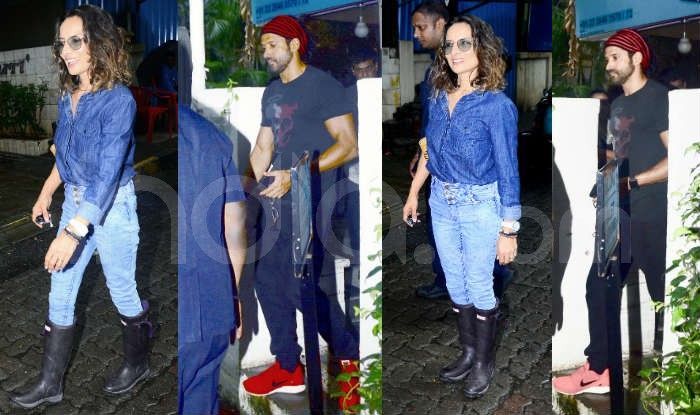 Farhan and Adhuna got divorced in the year 2016 citing mutual irreconcilable differences. Post which both of them moved on and started dating. While Farhan is currently in a relationship with Shibani Dandekar, Adhuna is seeing Dino Morea’s brother Nicolo Morea. In fact, they are often seen spending time with their respective partners and attending various events and parties together. Also Read - Mirzapur Controversy: No Arrest For Producers Farhan Akhtar And Ritesh Sidhwani

Farhan recently posted a lovely picture with his partner on Instagram. It was a throwback picture from their Thailand vacation. The actor and his girlfriend went on a holiday to island Koh Samui sometime back and Farhan took to Instagram to share a picture from the same holiday. It showed the couple posing for the camera while sitting in a pool. The caption on Farhan’s post made the picture go instantly viral on social media. He wrote, “At, by and on your side. @shibanidandekar ❤️ #poolheads #kohsamui #FarOutdoors” (sic)

Meanwhile, Bollywood grapevine is abuzz with the rumours of Farhan-Shibani’s wedding this year. The speculations are rife that the actors are planning to tie the knot by the end of this year. However, there’s no confirmation on the same.