Farhan Akhtar and Shibani Dandekar who are rumoured to be dating keep sharing pictures with each other on social media and caption it, “bumped.” Recently, the couple was spotted hand-in-hand at Deepika Padukone and Ranveer Singh’s reception and left everyone surprised. Well, that was definitely not a “bump.” Also Read - 'Breathe With Me'! Farhan Khan, Shibani Dandekar's Loved-Up Underwater Pictures Are Full of Romance

Both the stars have not said anything but their actions prove that there is something more than friendship between them. Earlier today, Farhan took to his Instagram story of picture of Shibani and captione it, “You know who you are sunshine girl”. Also Read - Javed Akhtar on if He Finds His Children Smoking Marijuana: I Would Tell Them Not To Do It, It's Not Right 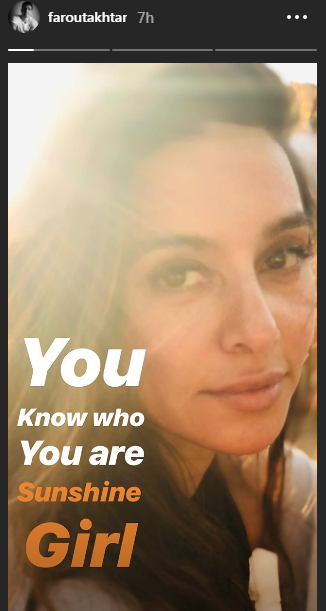 Earlier, when asked about dating Farhan, Shibani told Mid-Day, “I don’t need to make an announcement about who I’m dating. It’s up to me to decide when and what I want to share about my personal life and it is up to the audience to decide how they look at it. How much information I want to put out in the public domain is my prerogative”.

It all started when Shibani shared a picture with a man whose face was not visible. People started speculating that he is Farhan. Later, he himself shared the same picture with a heart emoticon. After that, they posted another picture and captioned it as, “Look who I bumped into! So great seeing you.”

It seems like love is in the air. However, we are waiting for the stars to make their relationship official. As Deepika-Ranveer, Priyanka Chopra-Nick Jonas are married, it will be interesting to see if Farhan has any such plans.

On the professional front, the actor is currently occupied with the work of his upcoming film, The Sky is Pink. They were recently in Delhi shooting for the movie. It also features Zaira Wasim and Priyanka Chopra in pivotal roles.