This is all so loved-up!

Actor Farhan Akhtar has shared a lovely post expressing his love for girlfriend Shibani Dandekar. The actor took to Instagram and posted a beautiful candid picture of him sitting with Shibani. However, what is even more beautiful is the caption. Farhan has dedicated a four-line poem to Shibani in Hindi asking her to smile for him once. His post reads, Also Read - Shibani Dandekar Looks Absolutely Hot In This Blue Bikini Avatar, Boyfriend Farhan Akthar Sends Love 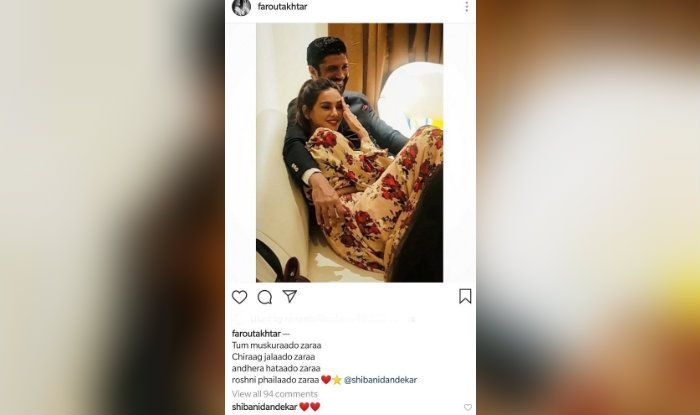 Both Shibani and Farhan keep giving couple goals with their romantic pictures on social media. In another picture recently, he confirmed his relationship with Shibani. Farhan posted a picture in which he was seen holding Shibani in his arms and the caption on the post said it all. Check out the picture here:

While the actor seems all expressive about his relationship with Shibani, the actress recently gave a rather cryptic statement about her relationship. When asked to confirm her bond, she said that her pictures with Farhan say it all, therefore, she doesn’t need to talk about it or confirm anything. She was quoted by DNA saying, “When I post something, it’s there for the people to see. I don’t think you need to write a caption or say something; it’s there in the picture(s). Whatever is there is what you want to take and make from it… I don’t think we are going out about to hide anything or announce anything. It is what it is.”

Meanwhile, the couple is rumoured to get hitched soon. The Bollywood grapevine is abuzz with the speculations of Farhan and Shibani all ready to take the plunge this year itself. Watch out!