FWICE Thanks Salman Khan For Supporting The Daily Wage Workers, Writes ‘You Are Always on The Peak to Help The Nation’

FWICE writes to Salman Khan and thanks him for helping the wage workers in their worst through his foundation Being Human. Read the full letter here.

Actor Salman Khan has been at the forefront of the COVID-19 war by helping many daily wage workers listed with the Federation of Western India Cine Employees (FWICE). Now, the federation thanked the actor for his generous contribution to the welfare of the wage-workers and supporting them in their worst everytime. In a letter written to Salman, the team of FWICE including Ashoke Pandit and BN Tiwari mentioned that the actor has borne the medical expenses of many workers and helped them over the years through his NGO Being Human Foundation. Also Read - Abhinav Singh Kashyap Gets Trolled For Speaking Out Against Salman Khan And His Family

A part of the letter read, “You have always helped these poor workers selflessly and stood with them during all their difficulties. May it be their expensive medical treatments or any other criticalities. Since past many years, these workers have received worry-free treatments for their highly expensive medical ailments due to your heavy donations to us through the Being Human Foundation. When the nation is affected by any natural calamity you are always on the peak to help the Nation. Your patriotism will always remain high in our hearts.” (sic) Also Read - After Sushant Singh Rajput's Death, Jiah Khan's Mother Accuses Salman Khan of Sabotaging CBI's Investigation 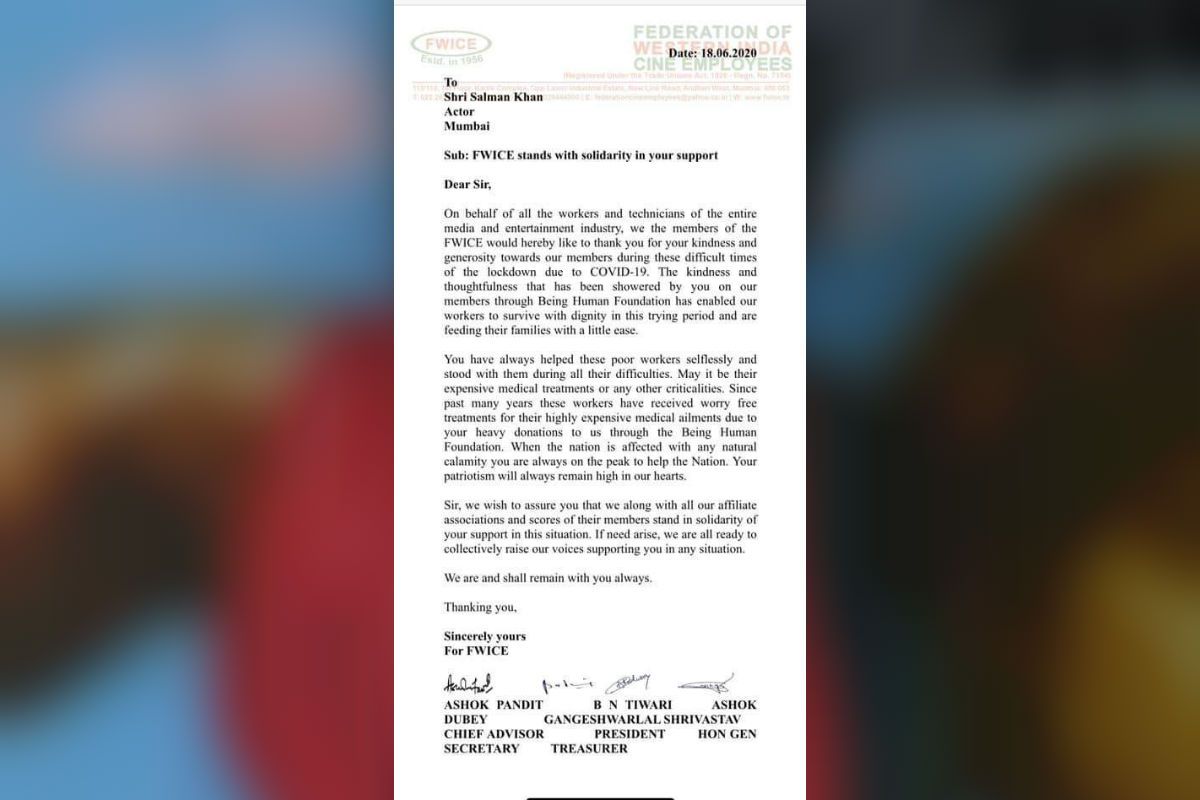 The federation also assured Salman of help in the future. The letter stated that the actor shall seek support in the cine body in case he ever needs them to raise their voices for his benefit in any situation. Also Read - Sushant Singh Rajput Suicide Case: Advocate Sudhir Kumar Ojha Files Case Against Karan Johar, Salman Khan, Ekta Kapoor And Others

Salman has also helped the specially-abled wage workers registered with FWICE by putting money directly into their bank accounts. The actor has launched a free food initiative called Being Hangryy during COVID-19 lockdown. He also recently contributed 1 lakh sanitiser bottles to the Mumbai Police after launching his new personal grooming range FRSH in May this year.