Good News: Here’s How Akshay Kumar And Kareena Kapoor Khan Tease Each Other Over Money

Akshay Kumar reveals that Kareena Kapoor Khan and her sister Karisma Kapoor never shy away from pulling his leg whenever they meet him.

Actors Akshay Kumar and Kareena Kapoor Khan might have been paired on-screen after 10 years, but their camaraderie remains the same. The actors have opened up to a daily about their chemistry and how they pull each other’s leg everytime they meet. Talking to DNA, Akshay recently revealed that nothing has changed between him and the Kapoor sisters over the years. He said that he has worked with both Kareena and her sister Karisma Kapoor in the past and their equation has always been funny. Akshay added that he always keeps teasing them saying they have a flat in every building of Bandra while they pull his leg over the amount of money he makes through films. Also Read - 'Happy Birthday Iggy Potter'! Kareena Kapoor Khan, Sara Ali Khan Share Lovely Wish For Ibrahim Ali Khan

Akshay and Kareena are soon going to take over the screens with Dharma Productions’ film titled Good News. The film has them playing a couple who’s trying to have a baby for around seven years. The shooting of the film wrapped up last week and now it’s in the post-production stage. Talking about how ‘disciplined’ Akshay is, Kareena told the daily that he is strict about his work schedule that actually helps her to finish her work and go back to her son Taimur Ali Khan. Bebo described Akshay as ‘extremely loving and well-mannered.’ The actor also feels that the Khiladi’s growth as an actor has been phenomenal and ‘highest’ as compared to others from his league. Also Read - Heavily Pregnant Neeti Mohan’s Incredible Workout Video Goes Viral- Don’t Try Without Supervision 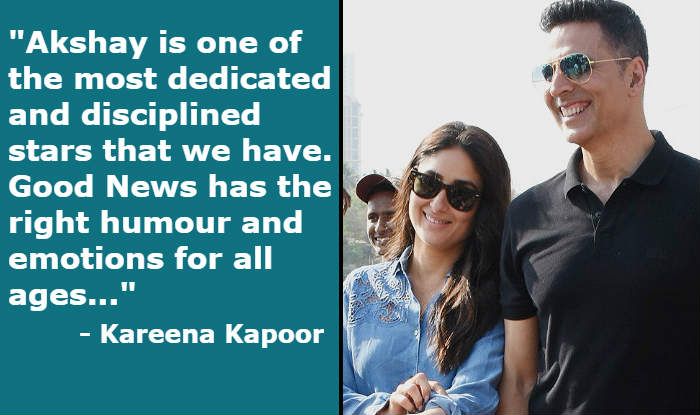 Good News, directed by debutant Raj Mehta, is being prepared for a September 6 release. The film also features Diljit Dosanjh and Kiara Advani as a young couple who helps the characters of Akshay and Kareena have a baby through IVF. Recently, the pictures of Kareena flaunting a fake baby bump from the film-sets went viral. The actor reminded her fans of the days when she was really pregnant with her first child and looked stunning.

Meanwhile, now that Akshay has wrapped up Good News, he is set to begin shooting for his next film –  a Hindi remake of Tamil horror Kanchana. Akshay plays the lead with Kiara opposite him. The film goes on the floors next week.