Hansal Mehta Gets Trolled After He Slams Rhea Chakraborty’s ‘Trial By Media’, Says ‘Let Her Guilt Be Proved In Court’

Hansal Mehta on Rhea: Let her guilt/innocence be proved in a court of law.

Amid the ongoing Sushant Singh Rajput’s death case, Filmmaker Hansal Mehta slammed Rhea Chakraborty’s ‘trial by media’. Taking to Twitter, he wrote, “God forbid if the girl being accused and being subjected to a trial by media does harm to herself. Will Arnab, all the politicians and all those invited on these media witch-hunts be held accountable? Let her guilt/innocence be proved in a court of law for heaven’s sake. (sic)” Also Read - Sushant Singh Rajput’s Brother-in-Law OP Singh’s WhatsApp Messages to Actor, ‘You Are Not in Charge of Your Life, Career or House’

In the follow-up tweet, he wrote, “Last evening I met people with no remote connection to the film industry making sweeping statements and playing judge. Result of an exploitative and conscienceless media that conducts its own banana court for its own vested interests. At whose cost? (sic)” Also Read - Sushant Singh Rajput Death: Mumbai Police Commissioner Reveals Why Rhea Chakraborty Left Actor’s Home On June 8

“Suddenly people have become experts on mental health, black magic, legality, and ethics. There are experts whose job it is to ensure healing, fairness and justice. Members of the media, friends are NOT experts or even remotely competent to examine the case”, he tweeted. Also Read - Sushant Singh Rajput Death Case: Bihar Government Recommends CBI Probe 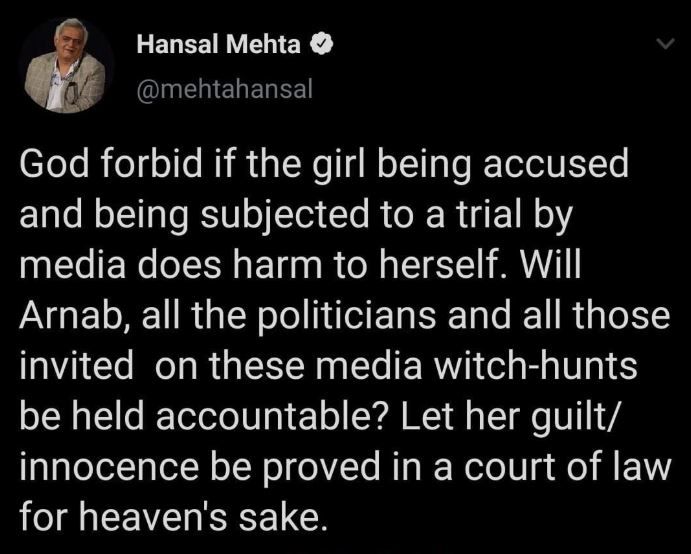 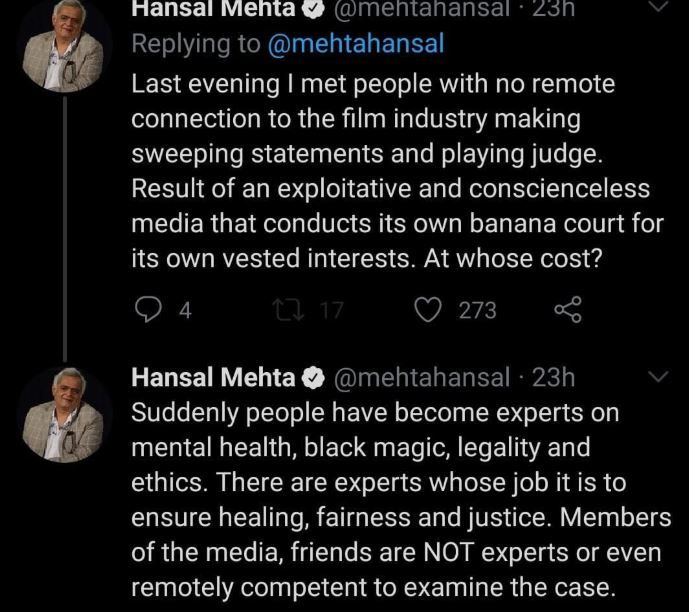 According to reports, Rhea, who has been missing over the past few days, reportedly left her building in the middle of the night along with her family. However, her lawyer has claimed that she is not missing. He said, “The contention of Bihar Police that Rhea Chakraborty is missing is not correct. Her statement has been recorded by the Mumbai police. She’s cooperated with police as and when called. Till today no notice or summons has been received by her from Bihar Police and they have no jurisdiction to investigate the case. She has filed proceedings in the SC. She has sought transfer of the case to Mumbai. The case is Sub Judice.”

On July 31, a video of Rhea went viral, where she was seen addressing the allegations against over the death of her boyfriend Sushant. In the clip, she said: “I have an immense faith in God and the judiciary. I believe that I will get justice. Even though a lot of horrible things have been said about me in the electronic media, I will refrain from commenting on the advice of my lawyer as the matter is sub judice. Satyamev Jayate. The truth shall prevail”.