Ranveer Singh turns a year older today and his close ones do not miss him in the quirkiest way possible. Deepika Padukone’s sister and his sister-in-law Anisha Padukone extended her wishes to her ‘Jijaji’ and in the most fun way. Taking to Instagram stories, she shared the actor’s GiF image dancing and wrote in hindi, “Janamdin ki hardik shubhkamnaye, jijaji (Wish you a happiest birthday, brother-in-law) (sic)” and it is absolutely unmissable.Also Read - Ranveer Singh Birthday: Lesser Known And Interesting Facts About The Bollywood Actor 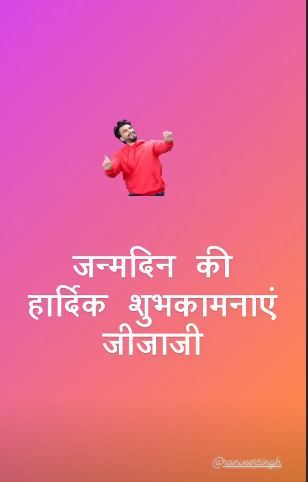 Ranveer will be celebrating his 35th birthday at home in self-quarantine with wife and actor Deepika Padukone. He has been home with his better-half ever since the first lockdown was announced in March. He is often seen interacting with fans, working out with Deepika and spends quality time with each other. He often shared exquisite food cooked by Deepika and entertain fans with his social media posts. Also Read - Ranveer Singh's 83, Akshay Kumar's Sooryavanshi to Have Theatrical Christmas And Diwali Release

Meanwhile, on the work front, he will next seen in Kabir Khan’s 83, which will be having Christmas release. In the film, he will be essaying the role of Indian cricketer Kapil Dev. It revolves around round how Team India created history by winning the World Cup for the first time in 1983 under the captainship of Kapil Dev. The film also features Pankaj Tripathi, Boman Irani, Tahir Raj Bhasin, Saqib Saleem, Harrdy Sandhu, and Ammy Virk.