Happy Phirr Bhag Jayegi, with Sonakshi Sinha and Jassi Gill as the new additions, is a laugh riot. Director Mudassar Ajiz, who was successful in presenting comedy in its most simple form with his 2016 directorial, does the same again. He entertains you by having some effortlessly funny one-liners on neighbours, India and China. He makes sure his comedy of errors appears balanced despite many unnecessary plot twists and a predictable narrative. He retains the two best characters from the previous Happy film, Jimmi Sheirgill as Daman Singh Bagga and Piyush Mishra as Usman Afridi. And that’s exactly from where the film gets its best moments.Also Read - Athiya Shetty-Patralekhaa's 'Hot' Comments on Diana Penty's Red Sizzling Look is All Girlfriends Ever!

Plot
Happy Phirr Bhag Jayegi roasts a very common narrative. It’s the story of mistaken identities. Two Punjabi girls, both named Happy, reach China for their respective works. But, the wrong Happy gets kidnapped at the airport and the entire hell breaks loose in China. Daman Singh Bagga and Usman Afridi enter the picture and are shocked to realise how fates have once again brought them together because of Happy. Jassi Gill, who plays a timid Punjabi man trying to make a respectable life for himself in the country, decides to help the kidnapped Happy, and eventually falls for her. Meanwhile, the original Happy and her husband, Guddu, are having fun on their honeymoon in China, quite innocently unaware of what’s cooking in others’ lives due to them. The climax brings them all together and leaves you with a smile on your face. However, you get to know by now that you wanted more from the film. Also Read - Diana Penty Looks Drop-Dead-Gorgeous in Latest Bridal Photoshoot

Performances
The absence of Abhay Deol as Nawaab Junior is highly missed. Though the character does exist in the film by the virtue of his mention in various situations, you long to see the chemistry he evoked with Happy or for that matter, his handyman, Afridi, in the previous film. Both Diana and Ali Fazal have been given less screen timing. But, the scenes featuring them together are sure to tickle your funny bones. It’s a delight to watch the original Happy putting her running shoes again. This time, in China.

Sonakshi Sinha, after appearing as a misfit in a few initial scenes, takes on the film subsequently. Her Happy is loud where she’s expected to be and turns into a lovely damsel in distress who’s loved for her commitment to the self.

Jassi, in his Bollywood debut role, seems awkward from the word go. His performance lacks fluidity and the actor appears intimidated with the presence of other actors in the film. In the two scenes, which were evidently written to make him stand out, Jassi fails to sail through. Rather than adding to the comedy, the highlight of his character, epileptic blabbering, unnecessarily stretches the length of the film.

Both Jimmy and Piyush are confident. They know the film belong to them. The other cast members, actor Denzil Smith as the suave baddy, and Aparshakti Khurrana, as Happy’s homosexual friend, do justice to whatever is given to them in the story. 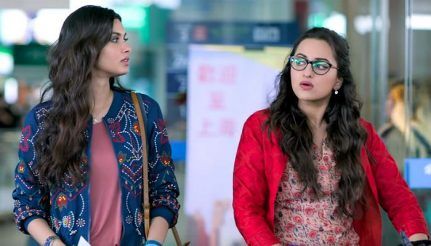 Highlight
Despite its many what-is-happening and where-are-we-lost moments, Happy Phirr Bhag Jayegi gives out a paisa vasool feeling. Especially because the director successfully decides to have the best of his focus on the chemistry of two characters — Daman and Usman. The previous film didn’t have many moments where these two came together. But, in the new film, you are given more than what you expected out of these two characters. Their constant arguments about India and Pakistan and the ‘tera bhai‘ gist by Jimmy’s character, make Happy Phirr Bhag Jayegi, happy. 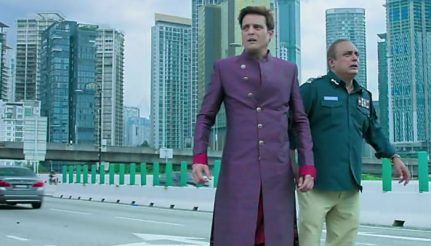 The word
If you found Happy Bhag Jayegi quite entertaining, you are in for a little disappointment with Happy Phirr Bhag Jayegi. It, however, successfully makes you laugh, and that’s what should count at the end of the day.

Watch the public review of the film here: