Hathras Case: Anushka Sharma Pens A Strong-worded Note About Privilege of Having Boy, Calls it Myopic

The actor hinted at the on-going brutality against women in the country and the on-going protest against Hathras gang-rape.

The brutal Hathras gang rape and murder case has sparked anger across the country. For decades, India has been a victim of Female infanticide and skewed sex ratio, and having a male child has been a norm among certain sections of the country. Actor Anushka Sharma took to her Instagram to pen a powerful note urging people to not consider having a male child as a so-called privilege. She wrote that ‘in our society, having a male child is viewed as a privilege’. Also Read - Aditya Narayan Makes a U-Turn on Neha Kakkar Wedding, Asks 'Is She Really Getting Married, Did Not Receive Viral Wedding Card'

The actor hinted at the on-going brutality against women in the country and the on-going protest against Hathras gang-rape. Also Read - Ludo Trailer Out: Anurag Kashyap Directorial is Impressive, Quirky Dialogues And Lots of Confusion Makes It a Worth Watch 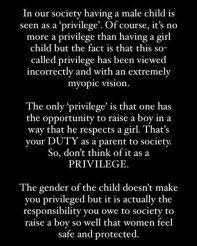 incorrectly and with an extremely myopic vision.’ The Rab Ne Bana Di Jodi actor further added the only ‘privilege’ is that one has the opportunity to raise a boy in a way that he respects a girl. That’s your DUTY as a parent to society. So, don’t think of it as a PRIVILEGE. Also Read - Mom-to-be Anushka Sharma Looks Super-Adorable as She Flaunts Her Baby Bump in an Beige-Brown Dungaree And Gets a 'Pocketful of Sunshine'

The actor in the post added, “The gender of the child doesn’t make you privileged but it is actually the responsibility you owe to society to raise a boy so well that women feel safe and protected.”

This is not the first time, the actor has expressed her thoughts on such brutality. The actor on Thursday took to Instagram to express shock at Uttar Pradesh’s Balrampur rape case, which happened just after the Hathras gang-rape incident. She wrote, “Barely any time has passed and we are hearing of another brutal rape!?! In which world do such monsters think they can do this to a young life.”