Actor Hrithik Roshan turns a year older today and birthday wishes from many Bollywood celebs pour in for the actor. Out of all, one sweet wish caught the eyes of many and it is none other than his ex-wife Sussanne Khan with whom he shares a very special bond till date. Also Read - Hrithik Roshan's Hollywood Debut Details: Actor Gives Audition For an Action Thriller, Fingers Crossed!

On Hrithik’s special day, Sussanne took to her Instagram to share a throwback picture from their vacation where the two can be seen in their winter clothes, sitting close to each other. She captioned it, “Happiest happy birthday to my BFF from and through this world…and onto other realms.. the force will always be with you  #shineonunlimited#thisman #bestBBF #10january2018#bestdadintheworld #soulmate”. Also Read - Hrithik Roshan Buys a New House For Rs 97.50 cr With a Sprawling View of Arabian Sea - Here Are All Details

A few days back, the Jodha Akbar actor took to his Instagram to reveal about his father Rakesh Roshan’s battle with cancer. He shared a picture with his father before hitting the gym where the father-son duo can be seen giving a macho pose. After a while, Hrithik’s ex-wife Sussanne showered her love for Rakesh and wrote, “He is stronger than any superhero, all will go smoothly”.

Asked my dad for a picture this morning. Knew he wouldnt miss gym on surgery day. He is probably the strongest man I know. Got diagnosed with early stage squamous cell carcinoma of the throat a few weeks ago, but he is in full spirits today as he proceeds to battle it. As a family we are fortunate and blessed to have a leader like him. . Love you Dad. 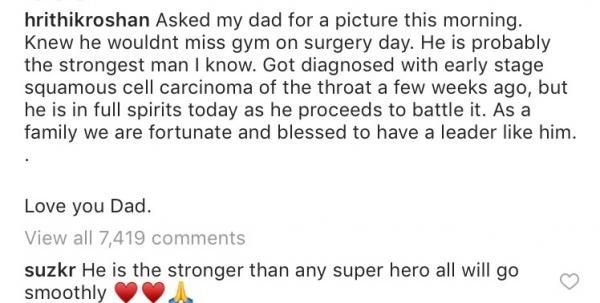 Earlier, Irrfan Khan and Sonali Bendre were diagnosed with cancer. Speculations are also rife that Rishi Kapoor, who is undergoing medical treatment in New York is also battling with cancer.

Hrithik and Sussanne tied the knot in 2000 but due to differences, the couple parted ways in 2014. They have two kids Hridhaan and Hrehaan Roshan. Even though Hrithik and Sussane are not together anymore, they still share a great bond and are seen going out on dinner dates with their kids.

On a professional front, Hrithik is gearing up for the release of his upcoming film Super 30. The movie is based on the life of mathematician Anand Kumar. It was directed by Vikas Bahl. However, after #MeeToo allegations against him, he was asked to step down. It is all set to hit the screens on January 25 and will fight the box office battle with Kangana Ranaut starrer Manikarnika: The Queen of Jhansi.