Sushant Singh Rajput’s death has sparked the debate of nepotism. Following social media outrage, celebrities deactivated their Twitter account, and many turned-off their comment section. Now, late actor Inder Kumar’s wife revealed that her husband was a victim of nepotism and has accused Karan Johar and Shah Rukh Khan for giving him false hope.Also Read - Monali Thakur Extends Her Support to Sonu Nigam, Says 'There is Alot of Mafiagiri, Nobody Gets Their Due'

Taking to Instagram, Inder Kumar’s wife Pallavi Kumar shared a long note wherein she narrated his struggle to get work before passing away in 2017. She says that Inder achieved success in the 90s and was at a peak of his career. Recalling the incident when Inder approached Karan Johar for work, she wrote, “Before he passed away I still remember he went to 2 people big shots asking for work as help. Just for the record, he was already doing small projects. But he wanted to do big movies just like he started. He went to Mr. Karan johar, I was there too. In front of me all happened. He made us wait outside his van for 2 hrs. Then his manager Garima comes and says karan is busy. But we waited & wen he came out, he says inder keep in touch with garima at the moment there is no work for you. And inder did that… for the next 15 days … the fone was picked up saying there is no work at the moment… after that inder was blocked.” Also Read - Who is Marina Kuwar? Know Everything About The Actor Whose Name Was Dropped by Sonu Nigam Against Bhushan Kumar 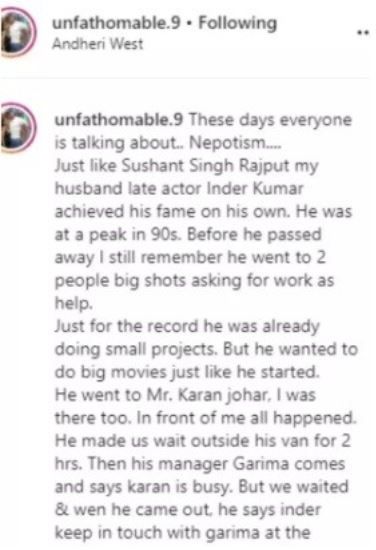 Narrating another incident, she says Shah Rukh Khan, on the set of zero, told Inder that he would call him in a week as there is no work at that time. She wrote, “Later was even asked to keep in touch with his manger Pooja… she did the same wat garima did…. Can one imagine and believe dat there has not been any work available in these two production houses. Karan johar has said many times he works with stars… well my husband was a star … still people remember him by his work.” 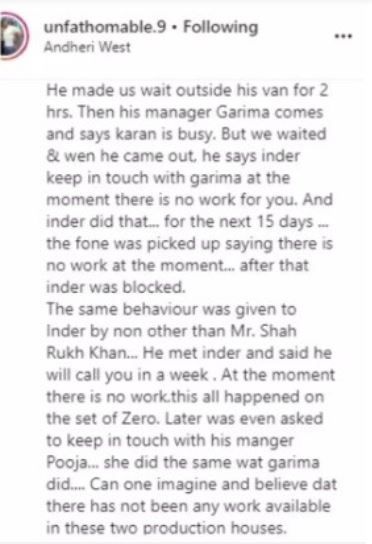 She concluded the note by raising a question about why is it difficult for talented people to get work in the industry. She wrote, “What are they scared of ? Or we can just say they are bad human beings… pretending to be nice. Nepotism should stop… people are dying and these big shots are still not understanding the effect. Government should take strict action against such people. 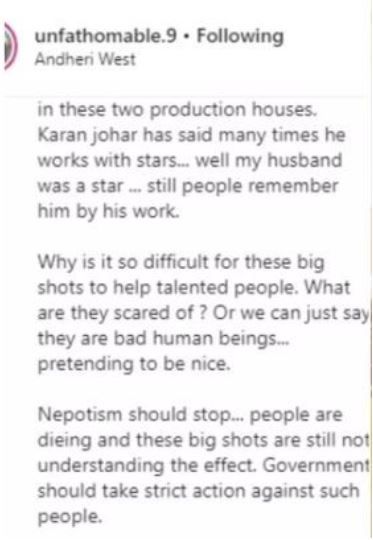 Inder Kumar passed away on July 28, 2017 due to cardiac arrest. She is known for his films such as Wanted, Khiladiyon Ka Khiladi, Tumko Na Bhool Paayende, Kahin Pyaar Na Ho Jaaye, among others.