Janhvi Kapoor was the latest guest for a discussion on cinema at the ongoing IFFI 2018. The actress attended the discussion with her father Boney Kapoor. The two celebrities exchanged words on the importance of cinema and how films are a mirror to the society. However, the highlight of the session was Janhvi’s poem dedicated to her mother, late actress Sridevi. The Dhadak star had written four lines expressing how much she misses her mother. And when the interviewer asked her to narrate those lines, she first hesitated but then read it out leaving everyone emotional at the event.Also Read - Janhvi Kapoor Trolled For Wearing Black Short Dress, Her Top Glamorous Bodycon Attires Where She Flaunts Her Toned Body Like A Boss

It all started when the interviewer told Janhvi and Boney that he never intended to bring Sridevi in his conversation but has now realised that no conversation is complete without talking about the late actress. Boney reacted to the same and revealed that Janhvi had written a few lines for her mom in Hindi sometime back. After knowing this, the actress was asked to share with the audience what she had written for her dear mom. When Janhvi spoke out, both she and her father couldn’t resist breaking down. Janhvi’s poem read, “Bachhi thi, fir achanak wo haq kho diya. Jo lat marti thi, ab uss se muh mod liya. Apni awaaz kho ke, apne maa ki awaaz mein baat karti hoon. Issi zariye, unko apne paas rakhti hoon”. Also Read - Janhvi Kapoor Gets Trolled For Wearing ‘Nighty’ Dress at Party, Fan Says ‘Literally in Lingerie’

She later went on to reveal that while everyone at home is happy to see how the entire Kapoor family has come together after Sridevi’s death, she herself hasn’t come to the terms with her mother’s death yet. Janhvi said, ” I can’t emulate her, even if I wanted to. It’s harder to say anything… When I say ‘growth’, I mean personal growth, I don’t know about artistic. This year brought me both the worst and the best experience of my life. It’s a little strange…”. 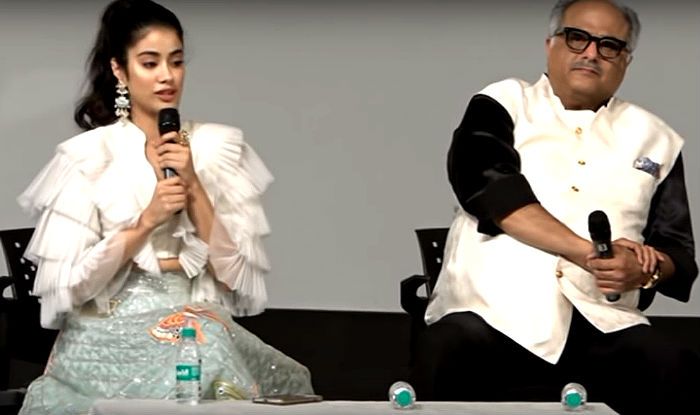 She added, “Our family is now united, so that is a very big thing for me. But, whatever happened was too heavy. We are still in shock, see we haven’t been able to process it properly. I’m really thankful for all the love that we have received, and I got a chance to work, which is a big thing for more. I got a chance to make my parents proud, which is important for me”.