Ranveer Singh's '83 will go on floors on this date. Kabir Khan reveals.

Ranveer Singh who is currently busking on the success of his last release Simmba has also started preparing for his upcoming film ’83 and now director Kabir Khan revealed about the shooting schedule. Also Read - Ranveer Singh's Diamond-Studded Wrist Watch is Super Stunning And Super Expensive - Guess The Price

Earlier, Ranveer has been spotted quite a number of times gearing up for his role as Kapil Dev. At a recent event, Kabir spoke about the film’s shooting schedule and said, “The major 4month schedule in London is May-June-July-August and some shooting will be in India.” He then spoke about Ranveer’s training and said, “Different expert cricketers are coming, KapilDev sir, Madan Lal sir, Yashpal sir and all the 83 cricketers will come. It’s loads of fun, it’s like boot camp, we train for 3 hours: physical and skills training and establishing different styles”. Also Read - Good From Perspective of Game: Kapil Dev on Renaming Motera Stadium After Prime Minister Narendra Modi

A few days back, Ranveer was seen at a cricket ground in Mumbai with Kabir to learn some sports techniques. Ranveer also posted a picture of him being trained under another celebrated cricketer, Balwinder Singh Sandhu. Also Read - Deepika Padukone’s Rs 12,500 Oversized Shirt Deserves a Place in Your Closet| See Viral Photos

Before he got into his training mode on the field, Ranveer took a moment to oblige his fans for selfies. The actor posed for the paparazzi and also got himself clicked with fans. While he was dressed all sporty for the day, the white sunnies took away all the attention. 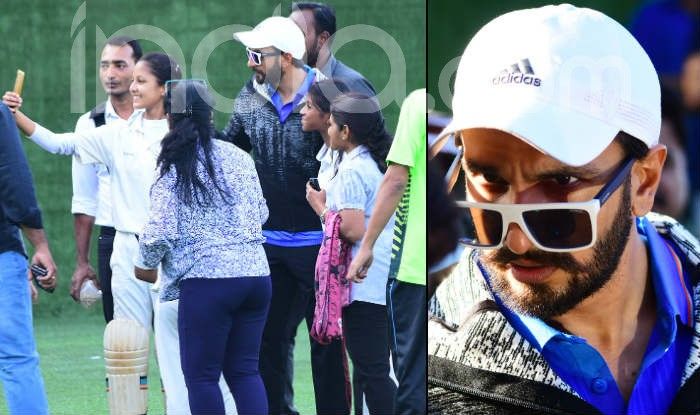 ’83 is the story of India’s historic first World Cup win in the year 1983 under the captainship of Kapil Dev. Punjabi singer-actor Ammy Virk is playing the character of cricketer Balwinder Singh Sandhu, who is known to have produced a ‘banana’ ball delivery to get rid of West Indies cricketer Gordon Greenidge in the final match.

Ranveer is currently busking on the success of his last release, Simmba where he played the role of a cop, named Sangram Bhale Rao aka Simmba. The film is raking in a good moolah at the Box Office.