Kalank: Katrina Kaif is All Praises For Her Friend Alia Bhatt After Watching Latter’s Performance in ‘Ghar More Pardesiya’

One of Bollywood’s most versatile actor Alia Bhatt is all set to release her next film Kalank and the makers dropped the first song of the film ‘Ghar More Pardesiya’ earlier today. The song features Alia and Madhuri Dixit Nene. While we have already seen Madhuri’s jaw-dropping classical dance performances in films like Devdas, Dil Toh Pagal Hai, Aaja Nachle among others but this is for the first time Alia is seen flaunting her Kathak skills. Recently, Alia’s friend Katrina Kaif watched the video and was all praises for her. Also Read - Suswagatam Khushaamadeed: Isabelle Kaif, Katrina Kaif’s Sister, To Make Bollywood Debut Opposite Pulkit Samrat

Alia, took to her Instagram to share a small part of the video where she is seen dancing. Katrina left a comment which read, “Well Done Alu..” A few days ago, Katrina had even wished Alia on her birthday and revealed that Alia’s pet name is ‘Alu’. Also Read - It's a Girl For Anushka Sharma, Virat Kohli! From Alia Bhatt To Sania Mirza, Celebs Pour In Their Congratulations! 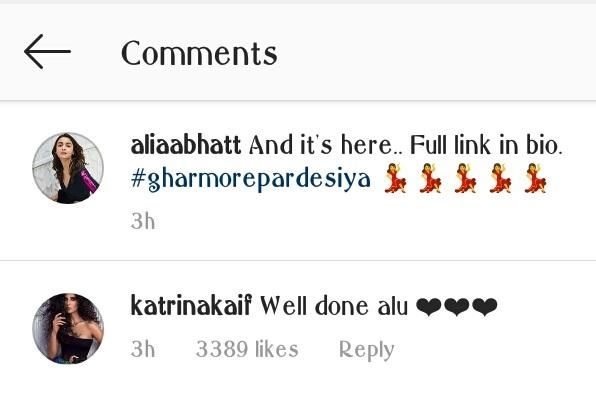 The Raazi actor keeps proving with every film of hers that she can make the most out of any role given to her. Not just with acting, but dance as well.