Kangana Ranaut says that the authorities are not renewing her passport because she has offended the Maharashtra government. She alleges that when Aamir Khan had done offended the BJP govt with his 'intolerant' statement, he wasn't harassed like this.

Kangana Ranaut drags Aamir Khan: Actor Kangana Ranaut has got herself in the middle of a new controversy. This time, after the local passport authority in Mumbai, refused to renew her passport, she took to her social media platform to call the Maharashtra government ‘Mahavinashkari’ and also mentioned Aamir Khan in her post. Kangana’s passport has been denied for renewal by the authorities on the grounds of the FIR filed against her at the Bandra police station on the charges of sedition. The actor took to her Instagram stories and wrote a big note alleging that when actor Aamir Khan had offended the BJP government in the past, no action was taken against him but she’s being allegedly harassed by the state government now.

Mahavinashkari government has started my indirect harassment again, my request for passport renewal has been rejected because a tapori/ roadside romeo called Munnawar Ali filed a sedition case ( deshdroh case yes the irony of it is hilarious) on me by the way the case was almost dismissed by the court yet court rejected my request for passport and the reason given is ‘ my request is vague’ hmmmmm

Mentioning Aamir Khan and his alleged tiff with the BJP government in the past, Kangana Ranaut took to her Instagram stories and wrote: “When Aamir Khan offended BJP government by calling India intolerant no one held back his passport to stop his films or shoots in no way he was stopped or harassed. But in my case, I am being harassed and due to my passport being held back I’m unable to travel anywhere (sic).” 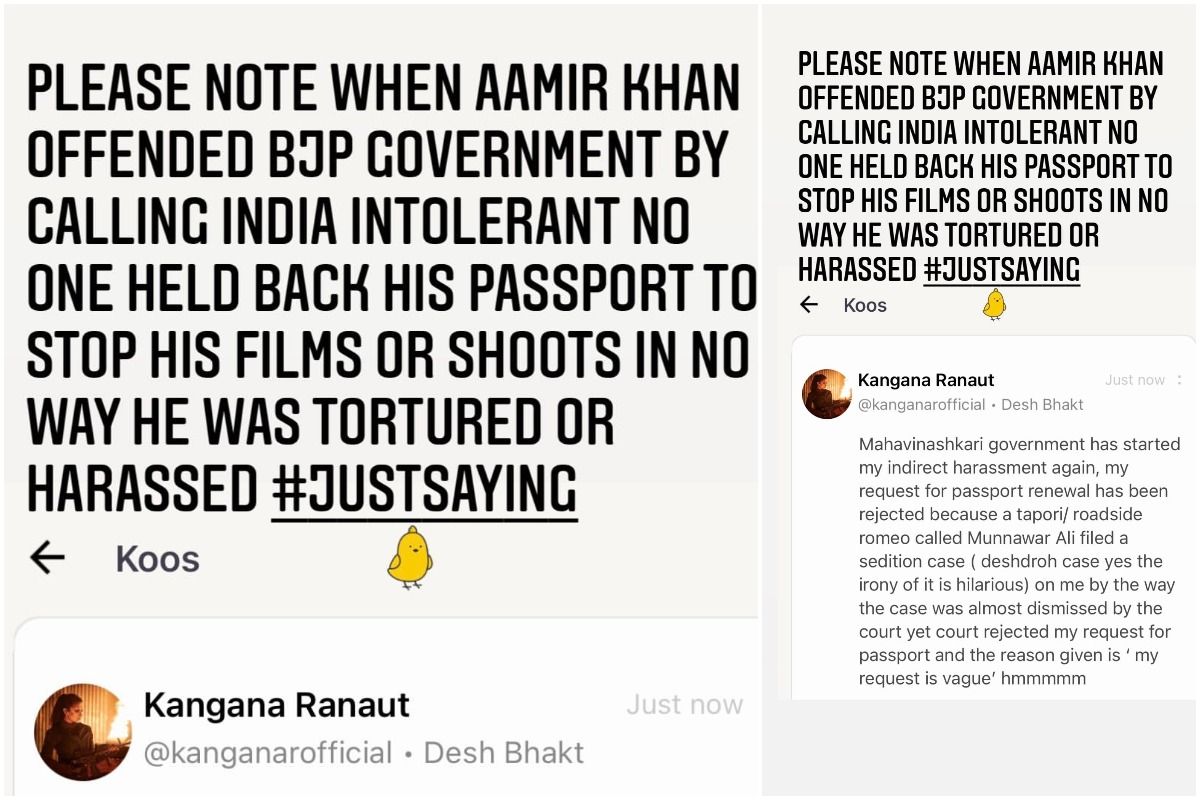 Kangana has been actively speaking against the Maharashtra government led by Shiv Sena’s Uddhav Thackeray. All this began in June last year when actor Sushant Singh Rajput passed away and Kangana accused the state government of not letting the case be investigated properly. This was followed by the demolition of her office in Bandra by the BMC after which Kangana reached the high court seeking damage charges. She alleged that Shiv Sena was behind the incident and that she had hurt the fragile ego of the party’s spokesperson Sanjay Raut by comparing Mumbai with PoK.