Actor Kangana Ranaut has launched a fresh jibe at Diljit Dosanjh and Priyanka Chopra on Republic Day following farmer’s tractor March at Red Fort today. Sharing a picture of a protestor hoisting a sacred flag of Sikhs at a second flagpole, she said that the incident makes a mockery of the nation on the global stage. Seeking answers from Diljit and Priyanka over the incident, she tweeted, “You need to explain this @diljitdosanjh @priyankachopra. The whole world is laughing at us today, yahi chahiye tha na tum logon ko!!!! Congratulations.”Also Read - Priyanka Chopra is ‘Not’ Opting Out of Jee Le Zara After Welcoming Baby Girl 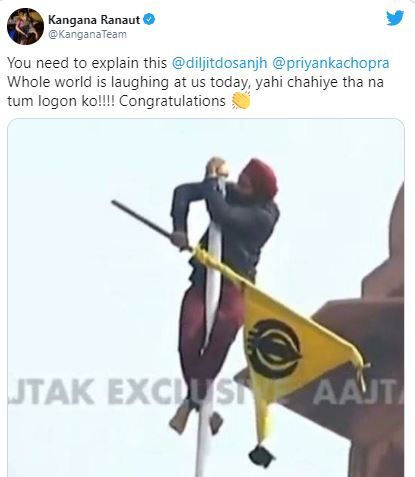 She even shared a video on Instagram talking about the Farmer’s protest today at Red Fort. She claimed that ‘Khalistan’ flag was hoisted today and people are supporting farmers’ protests. She further says that everyone who supports and is encouraging farmers should be put behind bars as the nation has become a joke and nothing will happen until actions are taken against the supporters. She captioned it, “Sick and tired of riots and blood bath almost every month, Delhi, Bangalore and now again Delhi #दिल्ली_पुलिस_लठ_बजाओ #RedFort. (sic)” Also Read - Delhi Police Arrests Man For Molesting JNU Scholar in Campus

Earlier, Kangana accused Diljit and Priyanka for misleading farmers after they extended their support to the protestors. In multiple tweets, she wrote, “People like @diljitdosanjh and @priyankachopra will be hailed by the left media for misleading and encouraging farmers protests, pro-Islamists and anti-India film industry and brands will flood them with offers and English/living in colonial hangover media houses will felicitate them with awards, the problem is the whole system is designed to make anti-nationals flourish and grow and we are too less in numbers against a corrupt system, but I am sure magic will happen in every fight of GOOD versus EVIL, evil has been much stronger, JAI SHRI RAM.”

“Cost of farmers protests so far 70,000 crores, because of dharna economic slowdown in neighbouring industries and small factories, might lead to riots, @diljitdosanjh and @priyankachopra you understand our actions have serious consequences please tell me who will pay for this?”, she tweeted.

Meanwhile, visuals from the Red Fort showed farmers hoisting the flag while thousands waved the national flag and stood at the huge gates of the fort. The police were seen trying to control the crowd. One farmer told NDTV, “We came here to deliver a message to the Modi government, our job is done. We will go back now.” Another farmer said, “We managed to reach the fort even though they tried to stop us. We will not stop till we reach our goal — the repeal of the three farm laws.”