Kangana Ranaut Shames Swara Bhasker With a ‘Crass’ Meme, She Replies With a ‘Classy’ Tweet

Kangana Ranaut encouraged a troll who mocked Swara Bhasker by calling her 'crass'. However, Swara took it sportingly and sent lots of love to Kangana back.

Actor Kangana Ranaut once again decided to take a cheeky dig at her old colleague Swara Bhasker this Sunday. After attacking Taapsee Pannu on social media and getting no attention from her, Kangana tagged Swara Bhasker in a meme that mocked the latter for her appearance and carrying a look that the Manikarnika star flaunted earlier. Both the actors could be seen wearing a beige coloured saree in the photos that compared their looks. Kangana reshared the meme that had ‘class’ written on her photo and ‘crass’ on Swara’s side.Also Read - ‘Take Their Heads Off’! Kangana Ranaut's Twitter Account Restricted For Allegedly Inciting Violence

While the meme was in bad taste, Swara took it sportingly and decided to turn this ‘below-the-belt’ attempt to mock her into a ‘classy’ conversation. She tweeted to Kangana saying she’s always happy to ‘alleviate’ her boredom. “Always happy to help alleviate your boredom Kangana.. you know I love you :)” she wrote on Twitter. Here’s the screenshot of the meme and how Swara handled the entire mocking and shaming: Also Read - Swara Bhasker Demands Support For Richa Chadha After Bhim Sena Chief Threatens to Cut Her Tongue Over Madam Chief Minister Row

Always happy to help alleviate your boredom Kangana.. you know I love you 🙂 💜 https://t.co/PdExEfm36K 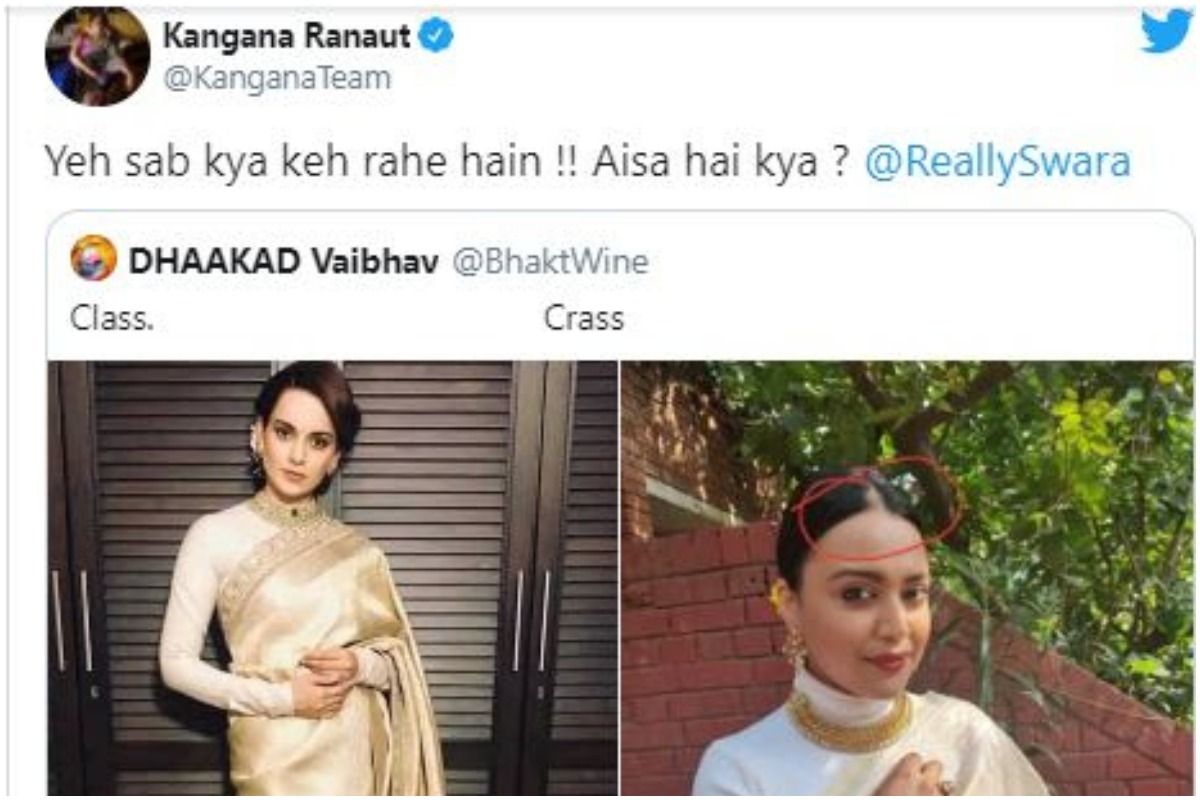 Kangana has been tagging both Taapsee and Swara in various tweets that mocked them or insulted them for their choices, both personal and professional. While Swara has worked with Kangana in the Tanu Weds Manu series, Taapsee has never shared a screen with her.

Earlier, Kangana had shared a meme that mocked Taapsee for doing a photoshoot with the same background that was used by Kangana once in her photoshoot.

Your thoughts on Kangana mocking Swara?